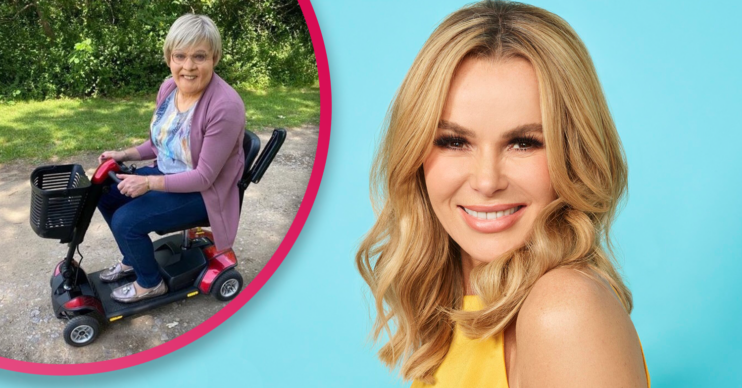 The Holden Girls starts on E4 next week and, ahead of the premiere, Amanda Holden‘s nan has joined Instagram.

As ED! went to press, Nana Myrtle’s influencer status was on the rise, with Piers Morgan, Ashley Roberts and Amanda herself among her famous followers.

Amanda alerted her followers to the news via her Instagram Stories.

Who plays Amanda Holden’s nan in The Holden Girls?

The spoof documentary follows Myrtle as she moves in with her granddaughter and her family.

Read more: So who IS playing Amanda Holden’s nan Myrtle?

Earlier this week the famous face behind Myrtle’s prosthetics was apparently revealed.

Listings in the Radio Times revealed Keith Lemon star Leigh Francis is behind the make-up.

However, neither Amanda, Leigh nor E4 have broken their silence on the reports.

After being introduced by her granddaughter, Myrtle has shared a handful of posts to the social network.

How did Amanda fans react to the news?

Amanda’s fans were quick to give Myrtle a like.

Others commented on her videos and pictures, which see the grandma saying hello to her followers.

Another picture shows Myrtle in a motorised wheelchair.

Interior designer Kelly Hoppen commented: “Ahh Nan how are you? Been ages since I have seen you, hopefully soon .”

Alan Carr, who was rumoured to be playing Myrtle, said: “Aww bless.”

One Amanda fan added: “I don’t understand if everyone believes this is actually Myrtle or if we all know it’s Keith Lemon but going along with it anyway, either way I’m looking forward to it.”

On a video of Myrtle dancing, another commented: “Queen Myrtle 😍. Can’t wait to see you on the tele! You’re already iconic to me.”

The Holden Girls: Mandy & Myrtle stars on Tuesday (September 7) at 1pm on E4.