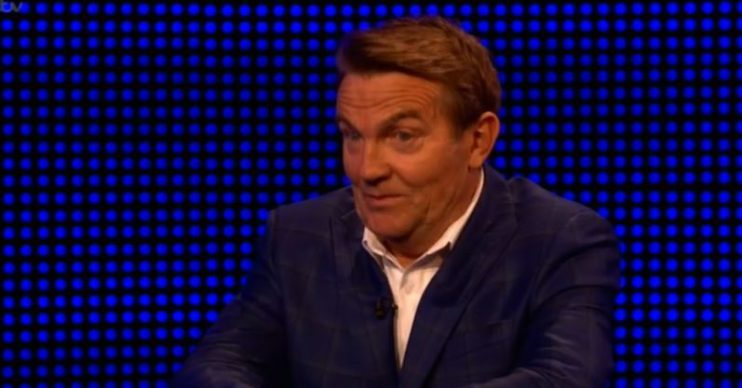 His answer technically was incorrect

A contestant on The Chase left viewers baffled after appearing to answer a question about I’m A Celebrity correctly – only to be told he’s wrong.

During this evening’s (March 2 2020) episode, the first of the hopefuls to step up to the plate was Dave from Hartlepool.

During his cash builder, he was asked to name the last word in the full title of the hit ITV show I’m A Celebrity.

Thinking he knew the answer, he answered quickly: “Get me out of here!”

But Bradley told him it was incorrect and, with it being the cash builder round, moved quickly on.

Not quite catching the exact wording of the question, viewers at home rushed to Twitter.

Some thought Dave had got it wrong because he had pronounced ‘here’ as ‘ere’, while others were certain he actually said ‘there’. One viewer called it the ‘most harsh’ incorrect answer they had ever seen on the programme.

“Most harsh wrong answer ever,” one tweeted, adding. “Get me out of here. #TheChase.”

Another said: “I’m A Celebrity… Get Me Out of ‘Ere’. Not an acceptable answer on #thechase.”

Most harsh wrong answer ever.

A third wrote: “I’m confused – didn’t Dave say I’m A Celebrity… Get Me Out of Here? Did I mishear it or did Bradley Walsh? #thechase.”

Someone else tweeted: “I’m A Celebrity… Get Me Out of There? #TheChase.”

Another joked: “Get Me Out of There #thechase.”

most harsh wrong answer ever. Get me out of here. #TheChase

I’m confused – didn’t Dave say “I’m a celebrity get me out of here”? Did I mishear it or did Bradley Walsh #thechase

However, some viewers who knew what had happened rushed to tell others that it was nothing to do with the way Dave pronounced ‘here’ – and that he simply didn’t answer the question right.

One said: “He’d have been right if he’d answered the question, which was ‘What is the last word of’. He gave five words.”

“[I] rewound it to check,” said another. “Definitely said ‘here’. Didn’t get it because Bradley said ‘one word’. Unfortunately, he gave the five. Harsh but still wrong, I guess.”

He’d have been right if he’d answered the question, which was “What is the last word of”. He gave five words.

thought that and rewound it to check, definitely said here. Didnt get it cuz bradley said ‘one word’ unfortunately he gave the 5. Harsh but still wrong i guess.

Read more: The Chase leaves viewers stunned as The Beast storms off stage

It follows an episode last week that saw a contestant criticised by viewers for giving a ‘ridiculous’ answer that lost her team £39k.

Hannah, Mary, John and Paul all bagged places in the final Chase and managed to get 21 questions correct ahead of chaser Mark Labbett’s turn.

Mark was asked, with just 11 seconds to go, to name the UK’s most venomous spider and answered incorrectly, giving the hopefuls the chance to push him back a step at the last minute.

Hannah said she thought it was the Daddy Long Legs, which isn’t even a spider, and when the team went with her answer, they got it wrong, enabling the Beast to answer one more question right and rob them of the five-figure prize pot.