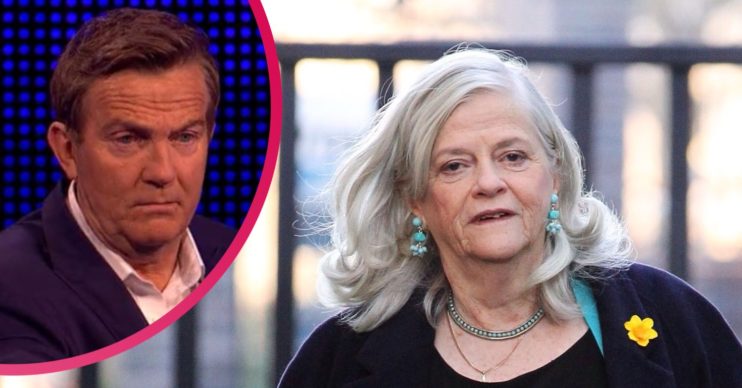 The politician and author helped win £100k for charity

A number of fans of The Chase had to turn off the Celebrity Special when they saw that politician Ann Widdecombe was on the programme.

What happened with Ann Widdecombe on The Chase?

When novelist Ann stepped up first, host Bradley Walsh asked: “Welcome to the show, Ann. Or more importantly, welcome back! What made you want to come back and do it a second time?”

“I have absolutely no idea! I don’t really know why I did it the first time” she confessed.

“You were trouble on that show, have you calmed down?” Bradders asked and Ann insisted she hadn’t, causing the audience to burst into laughter.

It was a thrilling episode that ended with the four celebs winning a staggering £100k for worthy causes.

But a number of those watching admitted turning off as they weren’t fans of Ann, who was a Conservative MP for Maidstone – and later, Maidstone and The Weald – for over 20 years.

One viewer said on Twitter, “#TheChase. Looking forward to it… Ann pops up!” alongside a GIF of a man switching off a TV.

Another wrote: “Widdecombe on #thechase. Excellent reason to switch off immediately.”

A third admitted being unable to stand having Ann on their screen.

Widdecombe on #thechase excellent reason to switch off immediately

Read more: The Chase star Anne Hegerty reveals she is on a ‘sabbatical’

However, not everyone felt that way.

One viewer wrote happily, alongside laughing emojis: “Oh I do love #TheChase #CelebrityChase & Ann Widdecombe too!”

Others praised her choice of charity – Safe Haven for Donkeys in the Holy Land, which helps abandoned donkeys in Israel and the Palestinian Territories.

“It’s a fantastic charity that needs as much help as it can get!” said one, adding that Ann was clearly “passionate” about the cause.

It’s a fantastic charity that needs as much help as it can get!

The Chase Celebrity Special is available to watch now on ITV Hub.

Leave us a comment on our Facebook page @EntertainmentDailyFix and let us know what you thought of it.