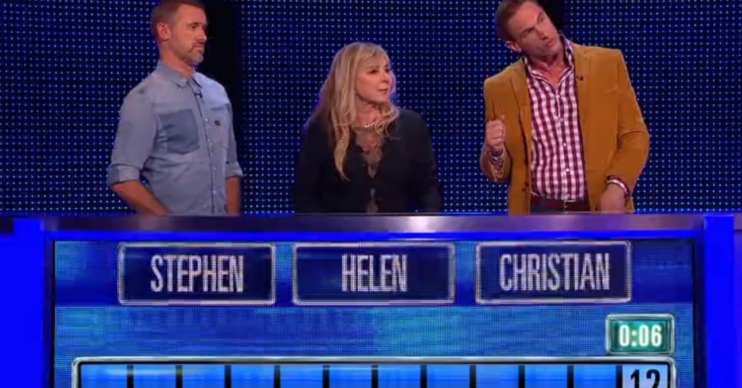 Paul Sinha had no trouble taking the team down

The Chase Celebrity Special viewers were left totally astounded during last night’s 2015 repeat as they called the team the ’embarrassing’.

With presenter Bradley Walsh backing them, things didn’t begin well for Dr Christian when he froze during the cash builder round.

How did Dr Christian do on The Chase?

Bradley asked him: “Uruguay and what other South American country’s flag features a sun with a face?”

He did end up back in the final chase after banking £5000, though.

Helen was up next and she committed the ultimate Chase sin when she went for the lower offer. However, she had only put £1000 in the pot and accepted an offer of £500, so it wasn’t all that bad.

She too made it back to the final chase.

Singer JB was more confident after winning £6000 in his cash builder round and opting to play for the higher offer of £60,000. It sadly didn’t pay off and he was caught.

Stephen brought £7000 to the table and stuck with that, despite being offer a staggering £147,000 as a higher offer. He made it home for the final chase.

How did the team perform in the final chase?

But things then began to royally fall apart as they played the quick fire round.

Christian seemed to be the only one pressing the buzzer, but made an almighty mistake when he was asked which UK country Henry VIII was born in and said “France”.

With the wheels well and truly falling off, the team limped to 12 points. It was an easy target for The Sinnerman to catch and he did so with one minute and seven seconds to spare.

Of his win against the team, Paul said: “They were a pleasure to play with, it’s a real shame JB went out when he did, it would have meant extra points because he had a very different range of knowledge. An absolute pleasure to play against.”

But those watching at home weren’t quite so gracious about it, taking to Twitter to call the team out for their shoddy performance.

The should apologise to their chosen charities and make a donation after this sorry effort. #TheChase

This is embarrassing. What a bunch of thickos!! #thechase