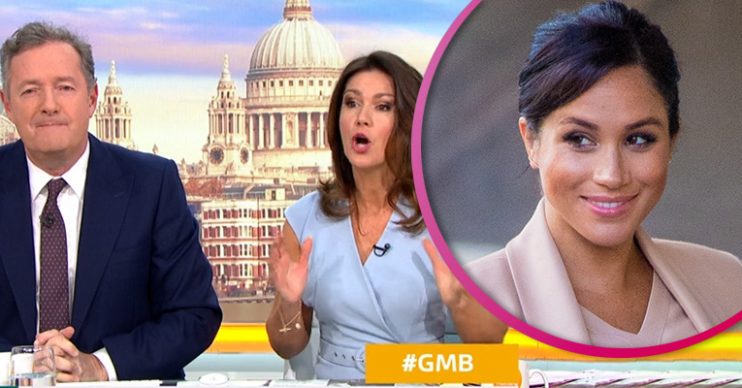 Susanna Reid hit back at Piers Morgan as he took a swipe at the Duchess of Sussex.

During Tuesday’s Good Morning Britain, the pair were discussing what name Meghan and her husband Harry will give their newborn son, who was born in the early hours of Monday morning.

Piers jokingly suggested that the couple should call their son after him as he believes “Prince Piers” has a “ring to it”.

The presenter, 54, was given odds of 100/1 that Baby Sussex will be called Piers.

Susanna sat there shaking her head, before hitting back: “Can we just let go of the fact that just because you went out for a drink with her, she didn’t have to become your best friend.

“You just need to let that go.”

Piers cut in: “You can have your view but you weren’t involved.”

Susanna quipped: “Well, she wasn’t involved for very long, was she?”

Piers said: “Well, I thought we were quite good friends for like a-year-and-a-half actually. I merely raise a little flag of caution.”

Susanna hit back: “No, today there are no flags of caution,” to which Piers interrupted, saying: “You mentioned it.”

Susanna said: “You mentioned the ghosting! I’m saying, can we just let that go?”

Piers added: “Prince Piers would be a nice way to get over things and bring us all back together.”

The cheeky broadcaster has often joked about how his blossoming friendship with Meghan fizzled out when she began dating Harry.

They later met up for a drink in London when Meghan was over visiting the UK, but Piers said she stopped communicating with him after that.

Meanwhile, Meghan and Harry welcomed their first child, a baby boy, on Monday.

Hours after the arrival of his son, Harry spoke to reporters and said he was “incredibly proud” of his wife.

He said: “I’m very excited to announce that Meghan and myself had a baby boy earlier this morning, a very healthy boy. It’s been the most amazing experience I could ever have possibly imagined.”

What do you think of Piers’ rant? Let us know what you think by leaving a comment on our Facebook page @EntertainmentDailyFix!