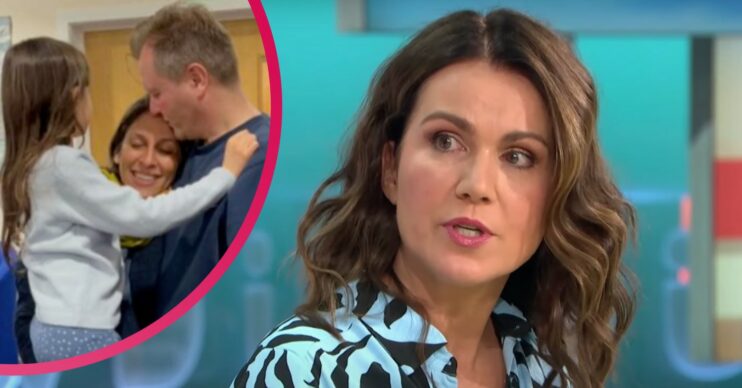 Susanna Reid got emotional on GMB this morning (Thursday March 17) as Nazanin Zaghari-Ratcliffe reunited with her daughter.

British-Iranian Nazanin was detained for nearly six years before returning to the UK overnight.

They met their families in the airport – and clips of their reunions showed Nazanin embracing her daughter Gabriella, seven.

She also hugged husband Richard Ratcliffe, who had campaigned for his wife’s release. He went on hunger strike for 21 days last autumn to bring attention to her case.

Having watched footage of the Zaghari-Ratcliffes’ emotional family moment, an affected Susanna noted how delicate the situation had been.

She said: “Richard Ratcliffe made the decision to openly campaign, to go on hunger strike.

“He had been warned it could risk Nazanin’s life and the risk that he took in order to speak out was hugely courageous and as a result brought everyone with him. As the huge response from viewers comes in, everyone’s invested.”

Susanna also made mention of the political circumstances around Nazanin’s release. Referring to when Boris Johnson was Foreign Secretary, she continued: “We’ve also seen the risks of misspeaking about it.”

Susanna went on: “Richard must have been walking on eggshells the entire time, worried about saying the right thing.

“He has done absolutely the right thing at every stage. Absolutely brilliant work.”

You have made us whole.

They said in a message shared online: “No place like home. Thank you to everyone who made this possible, to all of the care and campaigning, and diplomatic efforts. You have made us whole.”

‘We struggled to believe she was coming home until we saw her on that flight.’

Nazanin’s sister-in-law says her family didn’t want to get their hopes up this week until they knew she was on the plane back to Britain. pic.twitter.com/QYPvpBbnUN

The Zaghari-Ratcliffes’ lawyer Hojjat Kermani said Nazanin was freed alongside Anoosheh Ashoori after talks over a £400 million debt between the UK and Iran governments.

Read more: GMB: Susanna Reid urges reporter in Ukraine to ‘get to safety’

Nazanin sentenced to five years in jail in September 2016. She spent four years in Evin Prison in Tehran and one year under house arrest.

Good Morning Britain airs on ITV, weekdays, at 6am.