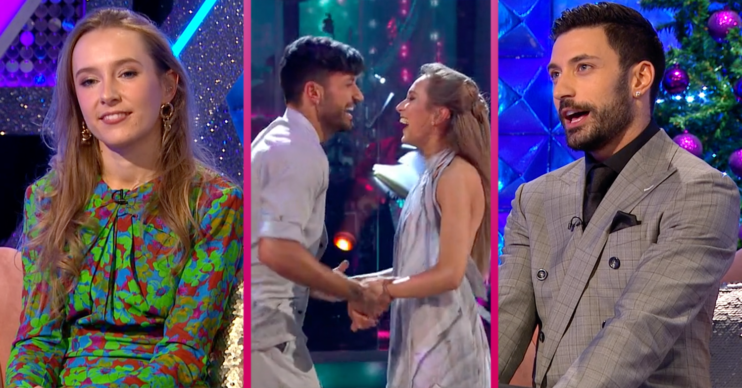 It would be 'weird' not to do it again

Strictly Come Dancing finalists Rose Ayling-Ellis and Giovanni Pernice have hit back after criticism of them dancing their Couple’s Choice again in the final this weekend.

The couple appeared on It Takes Two last night (December 16) and were asked about their final three dances by host Janette Manrara.

They’ll go up against AJ Odudu and Kai Widdrington and John Whaite and Johannes Radabe in tomorrow night’s final.

What are Rose and Giovanni dancing in the Strictly final?

Like the other two contestants, Rose and Gio will perform a spectacular Showdance.

They will also perform a dance picked by the judges – their Frozen-inspired Quickstep to Love is an Open Door.

Read more: Expert admits Rose and Giovanni’s ‘chemistry is unmatched’ on this series of Strictly

The couple have pictured their iconic Couple’s Choice as their favourite dance from the series and they will also perform that in the final.

However, Strictly fans did express some fears that the dance – which gave an insight into Rose’s world when they danced to a segment without music – it’ll be a moment the pair won’t be able to recreate.

One said: “Bit surprised Rose and Giovanni are doing their Couple’s Choice again,” said one fan.

“I thought they would have the same opinion as Jay as Aliona did with their jive in that they couldn’t do it again.”

What did Rose and Giovanni say about the dance?

Speaking to Janette, Giovanni said it would be “weird” not to dance the dance again.

“Is it going to be tough for the two of you to perform that again,” Janette asked, “because it was such a moment.”

“It’s such a special dance.”

Giovanni added: “Because it made such an impact and changed Rose’s life it would be weird for us not to do it again.

“It’s a statement that we want to do again and this time it’s the final so we want to really enjoy ourselves.

“We just want to go there and do it again,” he added.

The Strictly Come Dancing final is on Saturday (December 18) at 7pm on BBC One.

Are you excited to see it again? Tell us on our Facebook page @EntertainmentDailyFix.