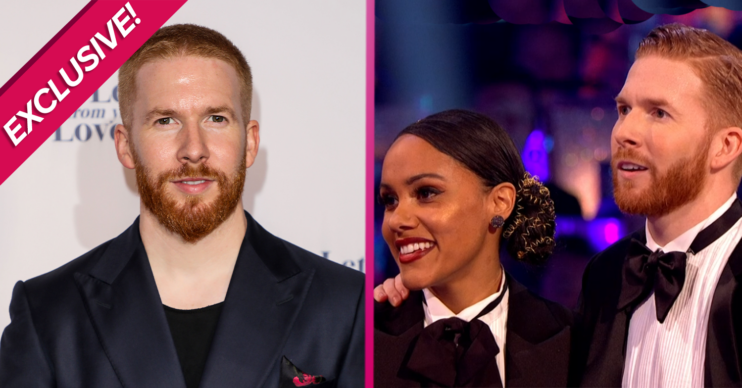 Strictly pro Neil Jones was knocked out of the BBC dance show early on this year, but that wasn’t the case when he was paired with the lovely Alex Scott.

For the 2021 series, Neil was partnered with Nina Wadia and, sadly, the pair were the first to be eliminated.

However, with ex-England footballer Alex, Neil very nearly made the final.

And, in a chat with Entertainment Daily earlier this year, he admitted they’re still firm friends.

BBC Strictly: What did Neil say about Alex?

Speaking about their friendship, he said: “With Alex it’s ongoing.”

He also hit back at backlash the star suffered when her name was in the frame to take over from Sue Barker on A Question of Sport.

“She’s a talented woman who knows what she’s doing so there’s always going to be people out there that don’t like that.

“I’m always so happy for her and so proud because she sends out a positivity and an energy that everything is possible.

“Even for me dancing with her she was an inspiration to me as well. We have this thing, me and her, we’re friends for life.”

Neil adored his time on Strictly with Alex, the first celebrity he was ever partnered with.

He said: “She had a bit of talent, she had rhythm which was good but she worked hard.

However, he did admit the pair had “a lot of problems”, with the sheer amount of dancing taking its toll.

“She had a lot of problems with her ankles and the stiffness of her body, so we always had to find a way to try and make it look good.

“But she loves dancing,” he added.

Tune into the Strictly results show tonight (November 7) at 7.15pm on BBC One.