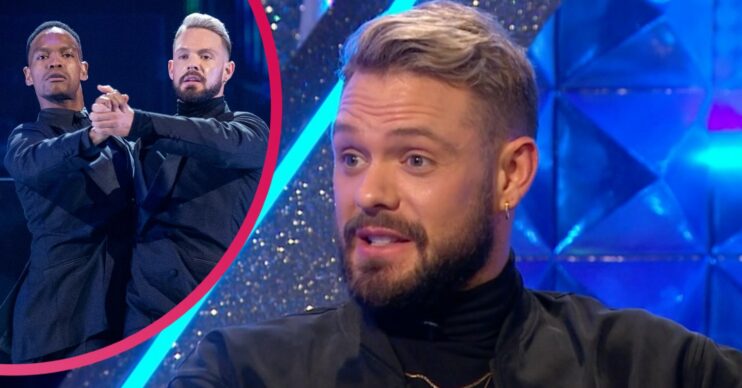 Strictly: John Whaite reveals he requested female partner over ‘anxiety’ of not being ‘accepted’

The baker is making history with partner Johannes Radebe

Strictly Come Dancing star John Whaite has revealed that he asked for a female partner over fears of being trolled.

The former GBBO winner, 32, is a clear favourite on the BBC One series alongside partner Johannes Radebe.

However, John initially felt “anxious” before making history as the show’s first ever all-male partnership.

John feared that he would receive “hate and flack” from viewers.

We have been conditioned to kind of expect hate and flack

“So honestly, I was quite anxious about it. I knew that it was an important thing to do, that it was hopefully going to change the way TV is, change the way that children feel when they watch TV – it’s massive – but I was expecting to get a lot of hate, like [people] sliding into the DMs and saying, ‘You’re disgusting’ and that kind of thing.”

In fact, John even requested for a female partner.

But the baker soon changed his mind and insisted that Johannes, 34, was his partner.

He continued: “At first, I said, ‘Can you put me with a straight partner?’ because I [believed] that that would be the only way it would be accepted, and then, about a month before we were partnered up, I [thought], actually, I want it to be Johannes; it has to be Johannes.”

John and Johannes have become one of the strongest pairings on the show this year.

But while the two appear to be getting on just fine, John recently slammed reports of a potential romance.

The star insisted that there is “no attraction” between them.

Speaking to The Sun, he said: “When you spend that much time with someone, you see them warts and all. I think I’ve burped in Johannes’ face – I might have even farted at one point.

“There is no attraction because you see sweat and everything.”

The pair announced their engagement in July 2017.

Opening up about Paul in the interview, John added: “Paul’s doing everything for us.”