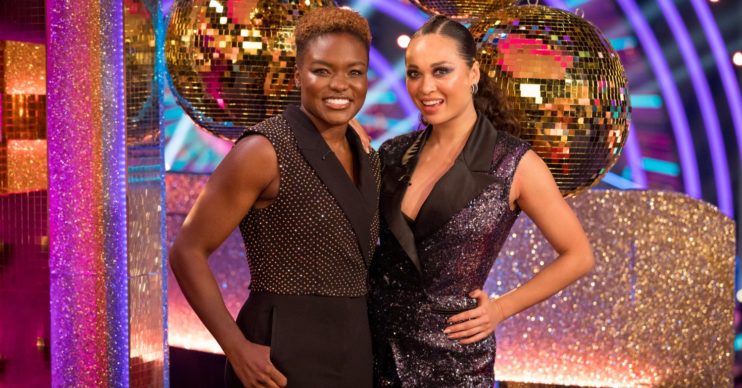 Strictly Come Dancing’s Nicola Adams: Everything you need to know about the first same-sex couple

The Olympic boxer certainly has fancy footwork in the ring!

Strictly Come Dancing contestant Nicola Adams was the first woman to win an Olympic gold in boxing – but can she win the Glitterball prize?

She plans to break numerous firsts on Strictly – she won’t be wearing a dress, and she’s partnered with the same sex for the first time in Strictly history.

Who is Nicola Adams?

The lesbian flyweight – who won Olympic gold in 2012 and 2016 – is the first ever celebrity to participate in a same sex couple on Strictly after requesting that she be paired with a woman.

The groundbreaking union comes just nine months after Dancing On Ice made history when Ian H Watkins and Matt Evers coupled up on ice.

Read more: Strictly: Who is Bill Bailey and why is he taking part?

How old is Nicola Adams?

What is Nicola Adams famous for?

Nicola was the first woman to win an Olympic gold in boxing. At the London 2012 games, she claimed the featherweight title. Four years later, she flew to Rio to defend her title and did it again! Go girl!

Ideally I would love to be playing the lead in a movie.

Why did Nicola retire?

In 2019, Nicola announced she was retiring from boxing.

“I’ve been advised that any further impact to my eye would most likely lead to irreparable damage and permanent vision loss.” she said at the time.

Earlier this year, Nicola revealed she was planning to carve out a career in telly – but who expected Strictly?

What school did Nicola Adams go to?

Nicola attended the Agnes Stewart Church of England school in Ebor Gardens, Leeds. During her teenage years, she learnt to box after her mum took her and her brother to an aerobics class where a children’s boxing class was on offer.

At 13, she took part in her first fight at a working men’s club in Leeds. She won the bout, but didn’t fight for another four years – mainly because there were few girls in her area who had taken up the sport like her. Her second fight was at 17.

After studying business studies, physical education and software development at college, she went to attend Hopwood Hall College in Rochdale where she got a BTEC in sports science.

Who is Nicola Adam’s girfriend?

She was engaged to fellow boxer Marlen Esparza, until they split after 16 months of engagement in April 2018.

Nicola is now dating 22-year-old beauty blogger Ella Baig after meeting on a night out two years ago. “I was at a birthday party and Ella was coming back from a wedding,” Nicola recalls.

Nicola and Ella told Loose Women that they enjoyed lockdown together because it finally gave them the chance to hang out more.

“I’m always away, so it was nice to spend time at home with Ella and be able to do things together,” she admitted on Loose Women, while Ella added, “It’s the most time we’ve been together.”

The pair of them post a lot on Instagram as a couple and recently uploaded a video hitting back at the trolls who have attacked them online.

Nicola and Ella reportedly angered BBC bosses after they asked their Insta followers if they should launch a raunchy OnlyFans page.

While they don’t have children,  the pair are the proud parents of an American Pitbull called Brooklyn, who even has his own Instagram @brooklynbullylife.

Has Nicola been an actress?

While she is obviously a knockout in the boxing ring, Nicola says she’s keen pursue a career in acting. Over the years, she has worked as an as an extra on shows like Coronation Street, Emmerdale and Waterloo Road!

Now she’s retired from boxing, she is keen to do more thesping.

“Ideally I would love to be playing the lead in a movie, so you will have to watch this space.”

Se also admitted she had been fired as an extra from Waterloo Road because she was too distractingly recognisable in the background.

Is Nicola gay or bisexual?

Nicola revealed she was lesbian in September 2020.

In a social media post, she said, “I’m lesbian not bi, just saying.”

Nicola came out at the age of 15 and admits she was nervous about telling her mum, although it turned she had absolutely nothing to worry about in the end.

“It was quite a scary thought for me at the time. I knew one other person in my school who was the same and we talked. We hadn’t come out… You never know how the family is going to react, so I was nervous.

“Mum was in the kitchen washing up and I was like, ‘I’ve got something to tell you’. I was so nervous, I was really sweating, and she says, ‘What’s wrong?’ And I was just like, ‘I’m bisexual’. And she was like, ‘Okay, put the kettle on’.”

Who is Nicola’s professional partner on Strictly?

Nicola and Katya Jones are paired on Strictly.

The first ever same-sex couple took to the stage together for the first time to perform in a group routine.

Speaking of the show’s historic pairing, Katya said: “I think the beauty of this partnership is it’s never been done before on Strictly so basically we are free to do what we want, there’s no real rules.”

The decision to include a same-sex couple in the competition follows a one-off routine from last year’s series that saw two male professionals dance together.

The BBC defended the decision to have a same-sex pairing following complaints from some viewers.

The corporation said the show was “inclusive” and that it was “happy to facilitate” Nicola’s request to dance with a woman.

Strictly Come Dancing continues on Saturdays on BBC One.

Are you happy Strictly has its first same sex couple with Nicola Adams? Leave us a comment on our Facebook page @EntertainmentDailyFix and let us know what you think!