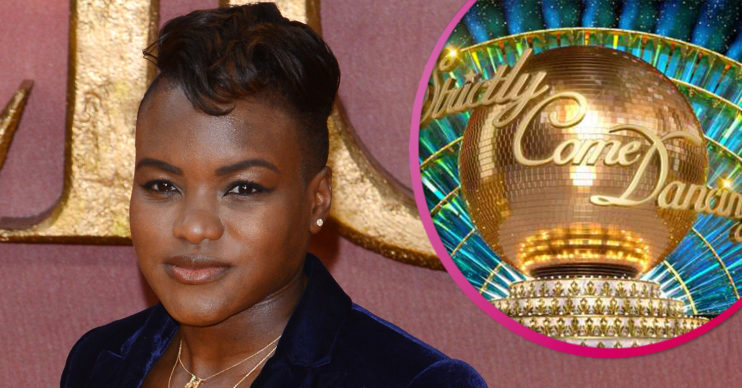 Strictly Come Dancing: Nicola Adams ‘to be first female contestant not to wear a dress’

Strictly Come Dancing star Nicola Adams will reportedly be the first female contestant not to wear a dress.

The 37-year-old boxer will form the show‘s first-ever same-sex couple on this year’s series.

According to reports, Nicola has asked Strictly bosses if she can to wear a trouser suit on the dance floor.

A source told The Sun on Sunday: “Anyone who knows Nicola will be aware that her wardrobe consists of jeans and trousers so it would be really unnatural for her to wear a dress.

It’s a personal choice and they want her to feel comfortable taking part.

“As far as the Strictly bosses are concerned, it’s a personal choice and they want her to feel comfortable taking part.

“The costume department is famous for pulling out all the stops and thinking outside the box.”

The insider said they’ve “got lots of ideas for themes and will be sure to incorporate some sparkle into her trouser suits”.

They added that Nicola “knows sequins come as part of the Strictly package”.

And she’s “more than grateful that the producers are making her feel relaxed”.

Ent Daily has contacted reps for Nicola for comment.

Meanwhile, Nicola previously revealed she asked to be paired with a female professional.

And the Olympic gold medalist, who is dating model Ella Baig, 22, is already looking forward to her time on Strictly.

She told the Mirror: “They wanted to know if I wanted to be on the show and I said, ‘Yeah, I’ll do it, but I want to dance with another female.’

“It’s really important, and it’s a big step for the show as well. It’s nice to see that we’re able to move on.

“I just can’t wait to get some dancing done.”

Nicola recently said is proud to be “part of the movement for change, diversity and breaking boundaries in the entertainment industry”.

“I’m a huge fan of the show and am thrilled to be part of something that holds such a special place in so many people’s hearts,” Nicola added.

Meanwhile, reports suggested Nicola and professional dancer Katya Jones will be a pairing.

A source told The Sun: “Katya sees it as a chance to make history but also to redeem herself on the show after her scandal two years ago.

“She’s a real girls’ girl and is keen to move on from that.”

In 2018, Katya kissed her dance partner Seann Walsh while married to Neil Jones.