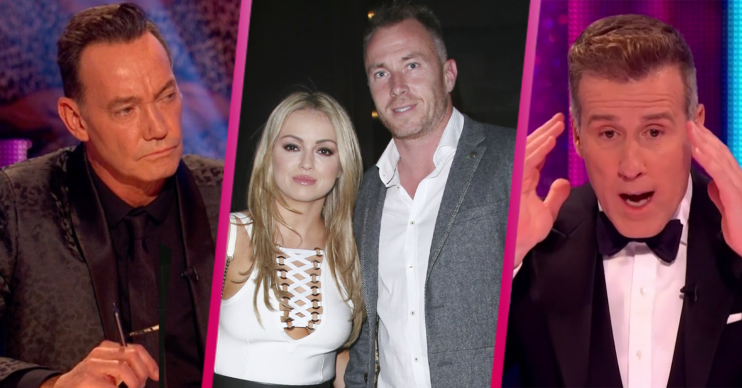 Strictly Come Dancing on BBC One: The most spectacular spats between judges and pros

It's handbags at dawn for this little lot

Although it’s a feel-good show, things can get very heated between the judges and pro dancers on BBC dance juggernaut Strictly Come Dancing.

And it’s most certainly not the only time the fur has flown on the BBC dance show.

Read on for our favourite Strictly spats between judges and pros…

One-time head judge and Strictly legend Len Goodman wasn’t backwards in coming forward when he spotted a foot out of place.

He and ex pro dancer James Jordan were never really the best of pals, but things sunk to a new low in 2011 when Len laid into James’ dance with Alex Jones.

After getting negative comments from the judges, James disregarded the remarks and said the public loved the routine.

He then heckled Len when he hit back.

This made Len shout at James: “All you’ve got to do is turn up, keep up and shut up.”

Ex Strictly pro Brendan Cole got a telling off from Bruno Tonioli after he was rude to Shirley Ballas.

Shirley had barely finished her sentence when Brendan butted in and spoke over her.

When she told him to watch the dance back later, he quipped rather patronisingly: “I will my dear.”

It was so awkward that Bruno Tonioli had to remind the dancer to “be more respectful” of the head judge.

His contract wasn’t renewed the following year and he claimed his “cards were marked” after he mocked Shirley in her first week as head judge.

Appearing on It Takes Two, Zoe Ball asked Brendan if he was hoping to impress the newcomer.

He replied: “I’d imagine she’s more likely to be wanting to impress us, I’ve been on the show 15 years, she’s just showed up.”

He quickly saw the “error of my ways” and issued an apology, which he said went unanswered.

Shirley has also spoken about her alleged spat with Brendan.

She’s since told Hello!: “I don’t have any recollection on a personal level of bridges ever being broken or rebuilt between me and Brendan.”

Giovanni was a newcomer to the BBC Strictly team when he rubbed head judge Len up the wrong way.

Following a performance with partner Georgia May Foote, Gio shook his head in disagreement over comments Bruno Tonioli made.

“All that shaking your head really gets on my wick,” he shouted.

“I’m going to tell you the truth. Too much posturing, posing and larking about. Two opening-outs and one forward basic does not constitute a rumba in my world.”

Craig, James and Ola were never the best of friends, it has to be said.

After she left Strictly and signed up for I’m a Celebrity – Get Me Out Of Here!, Craig said: “The jungle is welcome to her!”

He also criticised her sexy calendar and said talk about banning dancers from doing them was “a good idea”.

He said: “Strictly is a family show and then you have got Ola pouring milk all over herself with her legs spread.”

However, hubby James was having none of it.

“How can he say it’s not okay to sell a sexy Christmas calendar, but it is okay to sell his own book telling the world he was a drunken rent boy, and call it All Balls and Glitter?” James asked.

“Innuendo, anyone? Is that what a ‘family show’ is all about, Craig?”

Craig Revel Horwood and Shirley Ballas also came to blows after he made public comments about her body.

She revealed her upset in her autobiography, Behind the Sequins: My Life.

Shirley wrote of a time that she was on a book tour during her second year on the show and Craig made a remark about her breasts.

She wrote: “It was awful and very, very painful. It brought up a lot of things from my past that I thought I’d dealt with.”

Like the proper grown ups that they are, Shirley and Craig sat down for a talk about it to smooth things over.

She said she told him: “I’m your colleague. I should feel safe around you. You should feel like a protector to me and I should to you.

“If I have to worry every time you go out that you’re going to talk about me, that doesn’t make me feel good about being on this show.”

Shirley said that Craig apologised and sent her flowers.

Anton was paired with Emma Barton from EastEnders back in 2019 when a spot on the judging panel was just a twinkle in his eye.

A firm favourite with the audience, Shirley should’ve known she’d be in for boos when she told Anton and Emma: “I have absolutely no idea on what count you were dancing for this dance.”

“There are four beats and three steps – you have to understand that.”

“Sometimes there are four steps and three beats,” Anton interrupted.

Thankfully the pair get along much better now that he’s hung up his dancing shoes to join the panel.

Strictly Come Dancing is on BBC One tonight (October 9) at 6.45pm.

Head to our Facebook page @EntertainmentDailyFix and tell us if you’re watching.