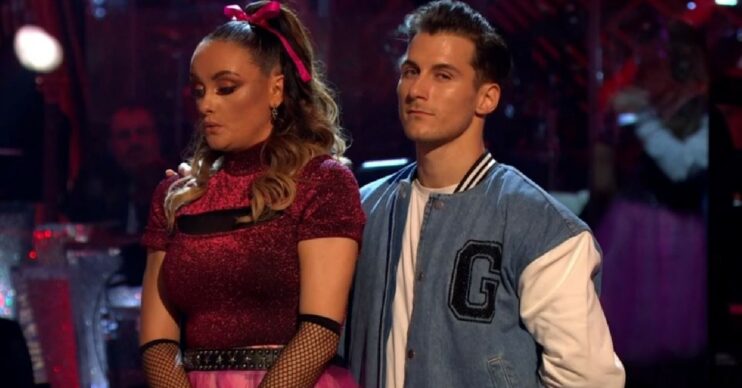 Gorka and Katie were saved last night following a dance-off

Professional dancer Gorka later took to Instagram to thank fans for their support and to also address claims he and Katie ‘aren’t getting on’.

It came after some viewers claimed they had spotted ‘tension’ between the pair during this weekend’s show.

Meanwhile, reports claimed that bosses were ‘disappointed’ over Hollyoaks actress Katie being stuck filming in Liverpool and missing rehearsal time.

However, a spokesperson for Strictly Come Dancing denied these claims.

Taking to Instagram last night, Gorka shared a touching message after he and Katie were saved.

Alongside a photo of himself and Katie pulling faces behind the scenes, Gorka said: “Well… that was intense.

“Not the best feeling to be in the dance off but I couldn’t be prouder of you @katiexmcglynn and how you gave your everything on that floor.

“Sorry to see @mr_njonesofficial and @nina.wadia leave they had so much to give to the show…”

Gorka added: “Thank you to everybody who voted and supported us it means the world, we’ll keep working hard and giving our best.

“And to those who think that we aren’t getting on keep thinking it.”

Former Coronation Street star Katie commented on the post: “We’ve got this!!! Thanks for being the best partner, and bring on MOVIE WEEK.”

On Saturday evening (October 2), Katie and Gorka performed the Jive to Good 4 U by Olivia Rodrigo.

And to those who think that we aren’t getting on keep thinking it.

The following night, they were in the dance-off against Nina Wadia and Neil Jones.

Who got voted out of Strictly?

After both pairs performed their dances again, the judges decided to save Katie and Gorka.

Craig Revel Horwood and Motsi Mabuse decided to save the pair while Anton Du Beke chose to save Nina and Neil.

However, head judge Shirley Ballas had the final say and she saved Katie and Gorka.

She said: “Both couples upped their game. Both couples were absolutely delightful to watch.

“I’ve decided to go with the couple who had a few more advanced technical actions within their dance and that couple is Katie and Gorka.”

Who did you think should have left Strictly? Head to our Facebook page @EntertainmentDailyFix and tell us.