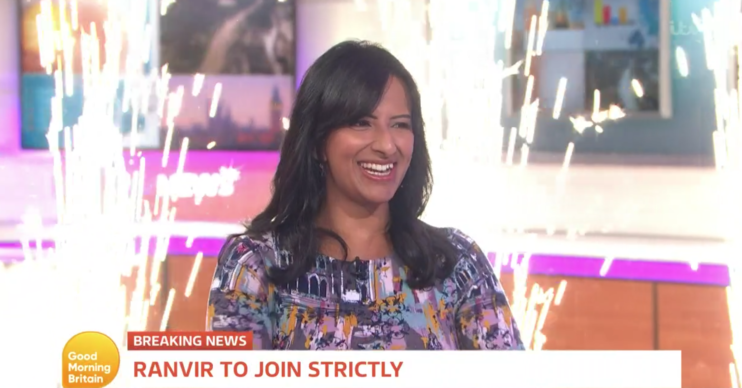 GMB has a long history with Strictly

Strictly Come Dancing season will soon be upon us and the fourth celebrity contestant has been revealed as Ranvir Singh.

Last night The One Show revealed the first three celebrities.

The show announced yesterday morning that it would be making the announcement in the evening.

Which other celebrities will be doing this year’s Strictly Come Dancing?

Five minutes into The One Show, Alex Jones unveiled Caroline Quentin as the first twinkle-toed contestant.

The second celebrity named was former NFL player Jason Bell. He is the former partner of Girls Aloud and I’m A Celebrity star Nadine Coyle and they share daughter Anaiya, five, together.

And the third confirmation was boyband star Max George from The Wanted.

How will Strictly be different this year?

Due to the coronavirus pandemic, the series will be different this year.

Firstly, the show will have a shorter run, as revealed by a spokesperson back in June.

They said: “The Strictly Come Dancing team are doing everything they can to bring the nation plenty of Strictly magic later this year.

There is no confirmation on the start date yet but it is likely to be October, with fewer couples taking part.

Pro dancers began rehearsals remotely at the end of July.

Both AJ Pritchard and Kevin Clifton quit after the 17th series.

Why did Kevin and AJ quit Strictly?

Kevin made the announcement in March, after seven years on the show, saying: “The past seven years have been some of the most wonderful of my life.

“I am grateful to the BBC and Strictly Come Dancing for giving me the opportunity to have been part of something truly special.”

AJ announced he was leaving a little after Kevin in March, sharing the news on Instagram.

“I have some news for you all,” he wrote.

“Please see the below statement from my team. Also sending my love to everyone in this difficult time, please keep safe. AJ x.”

It also appears that Bruno Tonioli may have to miss some of the series this year, due to commitments in the States and issues flying back and forth due to coronavirus.

What do you think of the celebrities so far? Leave us a comment on our Facebook page @EntertainmentDailyFix.