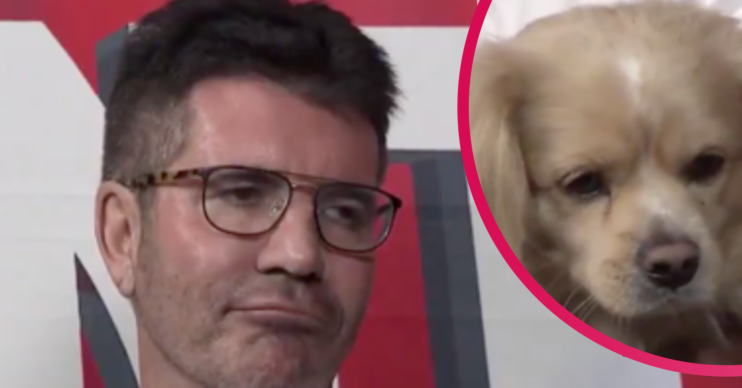 The TV judge is a well-known dog lover

Music mogul Simon Cowell was nearly reduced to tears after reuniting with a dog he once saved from a South Korea meat farm.

The Britain’s Got Talent judge, 60, previously donated £20K to the Humane Society International (HSI) to help free hundreds of pooches.

Appearing on Good Morning Britain today (July 16), Simon was left emotional as he met with one of the dogs who was saved thanks to his generous donation.

In a pre-recorded interview for BGT, he said: “It’s like eating a friend.”

Simon was then instructed to turn around before laying eyes on little Robin.

The X Factor star was heard taking a gulp as he reached out to the adorable pooch, who was wagging his tail in delight.

He said: “Without people like you he’d be in someone’s stomach.”

'Without people like you, he'd basically be in someone's stomach.'

Dozens of dogs were saved from slaughter at a South Korean dog meat farm by a donation from @simoncowell.

Here’s the moment @Piptomson introduced him to one of those rescued dogs at an exclusive interview. pic.twitter.com/GxAWimYARE

The reunion left hosts Charlotte Hawkins and Adil Ray grinning as they watched on from the ITV studio.

Adil later went on to reveal his own connection with Robin’s owner, saying: “Robin was in my bed two nights ago. I’m good friends with Pip outside of work.

Charlotte said: “Its tragic what is going on out there.”

Thanks to Simon’s donation, Robin now lives in Oxfordshire with his owner Pip.

As well as Robin, a further 200 dogs and puppies were also saved.

The HSI aims to rescue more than 200 caged dogs and puppies that are bred for human consumption.

Simon’s generous donation helped the organisation fund a rescue operation at a dog meat farm in Gyeonggi-do, while his fame also had an “impact” in raising awareness in the country.

At the time, Wendy Higgins, HSI’s Director of International Media, praised the star for his “enormously” beneficial gift.

The operation was the 13th dog meat farm the organisation had shut down and they found the canines in the facility were covered in sores and had skin diseases, and were kept in dirty, sparse wire cages with “absolutely no enrichment or comfort.”

Wendy added to PEOPLE: “It’s my fifth dog meat farm closure with HSI and honestly, it never gets any easier, it never feels any less horrific to see these dogs clearly so terrified and yet so desperate for human affection.”

Simon, who often favours dog acts on BGT, is a huge animal lover and has a soft spot for canines in particular.

He also cares for his late-mum’s dog, Freddy, and adopted a fourth dog called Daisy in 2018.

In May, the TV judge was nearly reduced to tears over a dog called Miracle on the ITV talent show.

Miracle was rescued from Thailand after being stuffed into a cage with 1,000 other dogs.