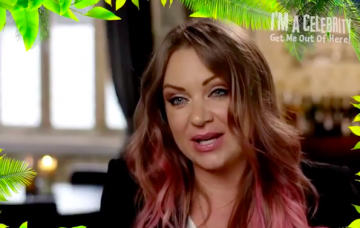 For ten years, we all knew her as sassy Roxy Mitchell on EastEnders, before she was dramatically killed off alongside Samantha Womack, who played her sister.

And now I’m a Celebrity… Get Me out of Here! star, Rita Simons has admitted she’s still not over being fired, admitting she can’t even watch the BBC1 soap.

In comments reported by The Mirror, the TV star replied dismissively to a question about her old soap, saying: “I haven’t had time to watch any TV at all for over a year now because I’ve been on tour so I haven’t watched anything.”

But the actress said it was after advice from a former co-star that she said yes to the adventurous ITV reality show.

She said: “I’m nothing like Roxy, I’m a mum-of-two, married, boring. But I spoke to Larry Lamb and he said I’m A Celebrity was the best experience he’s ever had and he couldn’t advise me more to do it. He said it would be the best experience, so I listened to Larry.”

Rita added that she hasn’t prepared for the jungle, saying: “I had about 649 jobs in the run up. And so if I hadn’t had so many jobs to do, reality would definitely have set in by now!”

When she left EastEnders, Rita – who is the niece of Lord Alan Sugar – admitted being killed off was “a right [bleeping] kick in the [bleeps]”.

She was apparently still upset this summer, admitting: “I wish they hadn’t killed us off. I don’t feel bitter but I haven’t quite made peace with the fact we are dead.

“Both Sam and I were gutted. That decision was made by one person and we had no choice in the matter.”

But the TV actress is back on mainstream telly as she joins a host of other celebs this weekend in the Aussie jungle.

The 41-year-old also said – even though she wants to make everyone smile – that: “I can be a bit moody, sometimes. What makes me angry is – and I try not to swear – when someone is just a [bleep]. I have to say something.”

Forget EastEnders – who’s going to be watching I’m A Celeb? We have a feeling Rita’s going to make great telly.

Do you think Rita is going to be good value in the jungle? Leave us a comment on our Facebook page @EntertainmentDailyFix and let us know what you think.