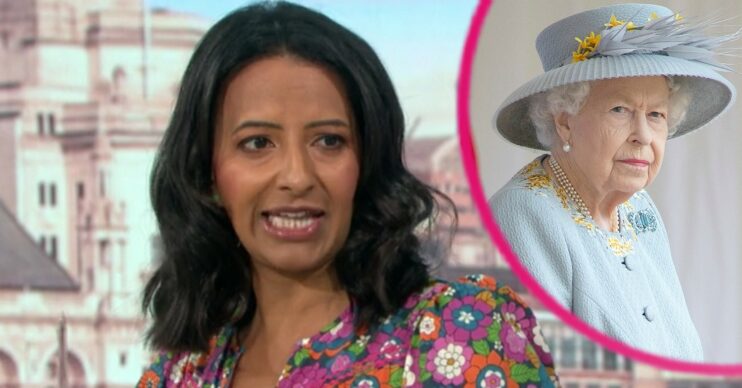 GMB: Ranvir Singh apologises to the Queen after ‘fumbled’ remark but viewers are disgusted

Her words came out far worse than she intended

Ranvir Singh has been criticised by GMB viewers today (August 5) after making a comment about the Queen.

The presenter appeared on the ITV programme on Thursday alongside co-host Sean Fletcher.

But it appears her remark about the 95-year-old monarch didn’t sit well with some.

What did Ranvir Singh say?

Ranvir, 43, made the comment as she revealed her connection to the University of Central Lancashire.

Sean responded: “You snuck in there that you’re a chancellor with a university, that’s brilliant.”

“It’s like being the Queen you don’t do very much but you go around shaking hands.”

Sean began to awkwardly laugh as Ranvir quickly added: “Sorry to the Queen.”

Despite her on-air apology, the comment caused a stir with viewers.

Viewers rushed to social media to criticise the ITV star.

Taking to Twitter, one said: “@ranvir01 I’m shocked and disgusted that you just said the Queen doesn’t do much but shake hands.

“You should be ashamed of yourself! Vile and disgusting words.”

In addition, a third wrote: “@ranvir01 as if you’ve just said the Queen doesn’t do a lot other than shake peoples hands.”

A fourth complained: “Can’t believe Ranvir said her role at university is like the Queen… who she said hardly does anything and just shakes hands!”

Agree you’re right – I actually meant it’s a ceremonial told without any real power but fumbled it. #livetv https://t.co/FxEdz14XXO

@ranvir01 @GMB am shocked and disgusted that you just said the Queen doesn’t do much but shake hands-you should be ashamed of yourself! Vile and disgusting words

A fifth added: “Are you a complete doughnut, the #Queen is a tourist attraction that brings in money for the #UK. Tourist landmarks don’t do much either, so do you wanna get rid of them as well?”

Another asked Ranvir: “Wonder if you’ll still be working at 95 if there is a pandemic about?”

Meanwhile, one shared: “#GMB gasp! Role of university chancellor… don’t do very much and a bit like the Queen. OK!?!”

However, the comments didn’t go unnoticed with Ranvir.

The presenter later addressed the criticism on Twitter, admitting she “fumbled” on air.

Ranvir penned: “Agree you’re right – I actually meant it’s a ceremonial told without any real power but fumbled it. #livetv.”

Replying to her message, one fan responded: “I knew exactly what you meant Ranvir, and yes, you are right.”