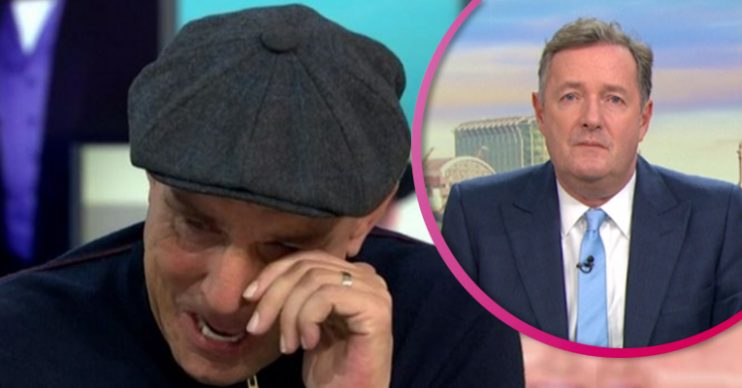 Tanya passed away in July

Vinnie Jones broke down in tears on Good Morning Britain as he discussed the death of his wife Tanya.

Tanya passed away aged 53 on July 6 after a six-year battle with skin cancer.

In his first TV interview since her death, former footballer Vinnie – who was married to Tanya for 27 years – became emotional as he reflected on the moving letter Tanya wrote to their daughter before she died.

He told hosts Piers Morgan and Susanna Reid: “That [letter] said, ‘Don’t grieve, I will be waiting for you.’ I believe that. I’ve got something to look forward to… and she’s waiting.’

“That’s what you deal with, that’s the best way to do it. That letter has made my daughter very strong. She’s now leading and taking up the reigns.”

Vinnie also spoke about a card that Tanya had written to him which said: “Vin, tomorrow something beautiful will happen.”

The star added: “And in it [the letter] she wrote that something beautiful always happens to her, she wakes up to me.”

‘Don’t grieve, I’ll be waiting for you.’

In a heartbreaking interview, Vinnie Jones quotes a letter he found from his wife Tanya who died in July after a long battle with cancer. pic.twitter.com/j9FwyJaE9J

Speaking about Tanya’s battle with cancer, Vinnie continued: “Over the years, all the hospital treatments and that, I’ve slept in a room with her every night.

“There was no way you’d leave her in there.

“She’d always say to me, ‘You’ll look after me Vin, won’t you.’ That’s the hardest thing, you can’t fulfil your promise.”

He also revealed that the couple both broke down on Christmas Eve when they were told the cancer had spread to her brain – but that Tanya was determined not to “ruin” Christmas for their friends and family.

He said: “[The doctors] put her on some steroids and it really puffed her out. She looked unrecognisable. She went on the steroids to get through Christmas. I think she knew she wasn’t going to make this Christmas.”

Vinnie also reflected on the moment the family were told that Tanya was nearing the end of her life.

Speaking about the night after Tanya passed away, Vinnie said: “When she passed away, I was shouting to the nurse, ‘Is she gone?’ and they said, ‘Yeah, she’s gone’, it felt like butterflies and Tinkerbell had left and were leaving the bed.

“That night we had gone outside and we didn’t know what to do. We were sitting around in the garden and it was about twenty five past twelve and I looked around and there was a white light.

“I blew a kiss and threw it up and I swear to you, Piers, the light was still there, it moved to the left, it went [spins round] and it went.

“That was the moment, I knew she was gone and that was me knowing that she is waiting now, in the spectrum of the universe.”

Vinnie said the medical staff spoke about transferring Tanya to a hospice, adding: “I said, ‘she ain’t going [to] no hospice.’

“She got to a situation with the fentanyl and the morphine, the hard pain killers, where I didn’t want her frightened.”

Following the heartbreaking interview, Piers tweeted a crying face emoji alongside a clip of Vinnie on the show.