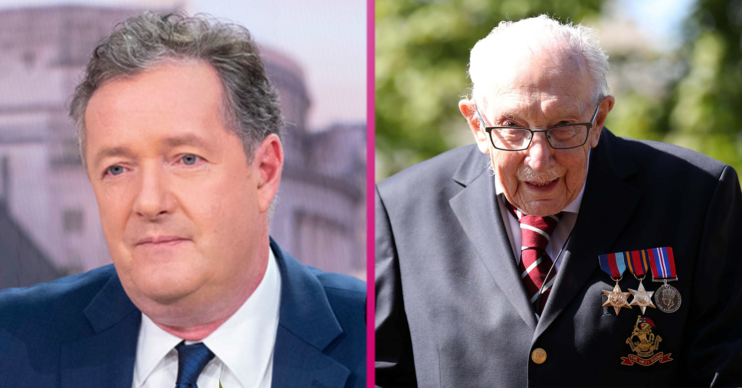 Good Morning Britain viewers were torn by the host's comments

Susanna Reid revealed that the 100-year-old war veteran is set to be knighted later on this afternoon.

In a bizarre twist, Piers then appeared to take credit for the hero’s achievement.

Piers Morgan takes all the credit

“You know, on April 15th, I woke up thinking this bloke should be knighted,” he said.

Footage of Piers interviewing Colonel Tom was then broadcast, showing him calling for the war veteran to be knighted.

In the clip, the hero laughed off the idea of receiving such an hour and said he wouldn’t hold his breath.

After the video was played, Piers said proudly: “We didn’t need to hold breath because he’s got it!

“Fantastic – it couldn’t’ happen to a nicer guy.

“What a marvellous moment for this extraordinary guy.”

Those tuning in at home were divided by Piers’ controversial comments and were quick to take to Twitter afterward.

Some were infuriated at the idea he was taking credit for Colonel Tom’s work.

One wrote: “F.F.S! Not seen #GMB for a while & within seconds Piers Morgan is claiming he is solely responsible for Captain Tom Moore receiving a knighthood from the Queen.

“Not the achievements of Sir Tom, No! All down to Piers….”

Another then added: “Piers morgan wanting all the credit for captain tom being a sir lol how’s he gonna get knighted ??

“On Skype lol Jean Claude van dam old and ugly now is that lol is this todays top guest?? @GMB.”

However, others praised Piers for helping Colonel Tom by giving his cause publicity.

One tweeted: “Piers Morgan Colonel Tim to be knighted and that is all down to you!!

“Your suggestion your publicly, well done my hero Piers and Sir Tom!”

Another added: “@GMB captain Tom so deserves this knighthood. He has been a true inspiration to the nation.

“Really can’t wait to get his books later this year. Piers you made this happen. Hope GMB is there when it happens.”

Colonel Tom is being knighted after raising more than £32 million for NHS charities.

Initially, the pensioner had hoped to raise just £1,000 by asking family and friends to sponsor him for talking 100 laps of his Bedfordshire garden.

However, as more people found out about his project, the donations increased.

Susanna Reid added: “He’s such an inspiration of the nation.”

The colonel will appear on Good Morning Britain later on today for an exclusive interview with Piers and Susanna.