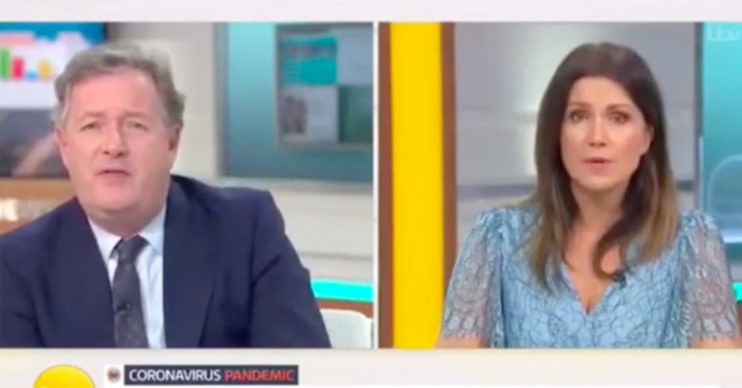 Viewers were left aghast by Piers Morgan on Tuesday’s GMB.

The polarising star, 55, cut off Susanna Reid, 49, as she attempted to read a statement from the government.

Many viewers accused Piers of being bullying as he spoke over his co-host.

She tweeted: “Whoa @piersmorgan on @GMB today. Yes, you are right to challenge the government the way you have and I support that but please do not ever shout down your brilliant other half @susannareid100.”

However, Piers didn’t respond well to her words. Instead of apologising he adamantly defended his actions.

He replied: “We were told to read out a Govt statement. But why should we when the Govt is boycotting us? I was registering my protest.”

Many of Arlene’s fans agreed with her stance on the social media platform.

One user responded to her choice words with: “Was awful and uncomfortable to watch him talk over her the way he did.”

A second user agreed with: “Dreadful behaviour. So disrespectful to @susannareid100.”

And a third user tweeted: “Thank you @arlenephillips. He was totally out of control so rude! And yes @piersmorgan I did want to hear the statement.”

A fourth viewer commented: “It was disgusting how he spoke to @susannareid100.

“He must apologise on air for his behaviour. He needs to remember it’s not his show, he gets paid to give out the news.

“He works with a team and should respect them.”

The debacle occurred when Susanna attempted to read a government statement in response to Piers’ criticism of its handling of student nurses.

We were told to read out a Govt statement. But why should we when the Govt is boycotting us?
I was registering my protest. https://t.co/397mz7NUtt

However, Susanna barely got a word in as Piers continually spoke over her.

Furious that Government ministers had refused to appear on the show for weeks now, he lashed out.

He asked: “Sorry, why have we got to read this?”

“If a government won’t come on our programme, why should we read their wishy-washy statement? If they want to have their statement read then come on the programme.”

Susanna repeatedly asked if she could read the piece.

She asked: “Well, can I read the statement?”

But Piers refused, and even covered his ears in defiance.

What do you think of Arlene’s words? Share your thoughts with us on our Facebook page @EntertainmentDailyFix.