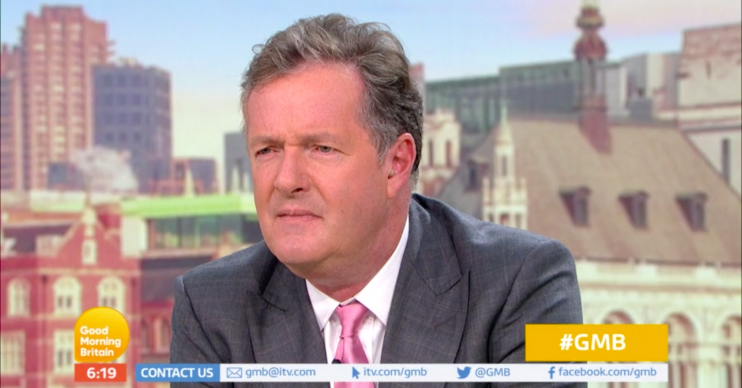 Let’s face it, it doesn’t take much to wind Piers Morgan up. But it looks like his wife crossed a line on Monday evening, when she tried to make the Good Morning Britain presenter jealous.

In fact, author Celia Walden had to publicly apologise to Piers, after he blasted her on Tuesday morning’s show for sharing a picture of a bronzed topless man on Instagram.

The awkward drama began on Monday, when Celia, 43 – who married Piers in 2010 – shared a photo of a very muscled man in tiny red pants washing her car.

Beside the shot, she wrote: “When the husband’s away Mr Suds comes to play. #youmissedaspot #everydaysexism #notanobject #ButtIWantToBe #Speedo #HollywoodLife #HawaiianTropic.”

The controversial TV star looked angry on GMB the next morning when discussing the shot.

He explained: “So my wife is in LA and she posted this picture from her Instagram. She’s just getting her car washed. This is someone called Mr Suds.

“I’ll be tracking down Mrs Suds who will be washing my Aston Martin next week. I’d like him off the premises immediately.”

He later returned to the subject, admitting he had texted his wife asking: “What the hell is going on over there?” He confirmed she had replied to say: “I’m really sorry, I did it for the likes.”

The 54-year-old dad-of-four went on: “I thought, ‘Oh my God, I mean seriously?’ It’s the rank disloyalty of everyone commenting on it…”

His GMB co-star, Susanna Reid was faux-sympathetic, asking: “Aw, are you feeling a bit wounded and jealous?”

REMINDER: Miss World will be tossing the coin on Sunday to kick off the big annual Morgan XI v. Newick CC charity cricket clash. In her crown. Nope, I can't believe I pulled this off either.. Play starts from 1.30pm All spectators welcome. @missworld @vanessaponcedeleon

Piers denied it, saying: “Not at all, no. Never get mad, get even.” He added that it was a “revenge attack” after he spent much of last week with Miss World, Vanessa Ponce. Susanna, 48, told him: “Yes and I don’t blame Celia, frankly.”

Either way, fans of the couple, who are parents to daughter Elise, seven, loved the insight into their marriage. But not many offered Piers sympathy.

One viewer wrote on Celia’s picture: “Now Mr Morgan has told us all, your page will crash.”

A third commented: “Ever been tempted to swap the hubby for Mr. Suds?!!”

Nine years ago today – he just reminded me #happyanniversary #sorryiforgotagain

Others were too distracted by the man’s muscles to worry about Piers’ temper tantrums.

One wrote: “Phew, Mr Sudds is welcome to wash my car anytime #notjealousatall.” A second commented: “Booked on the next flight.”

A third added: “My car needs cleaning I wonder if he would come to Liverpool.”