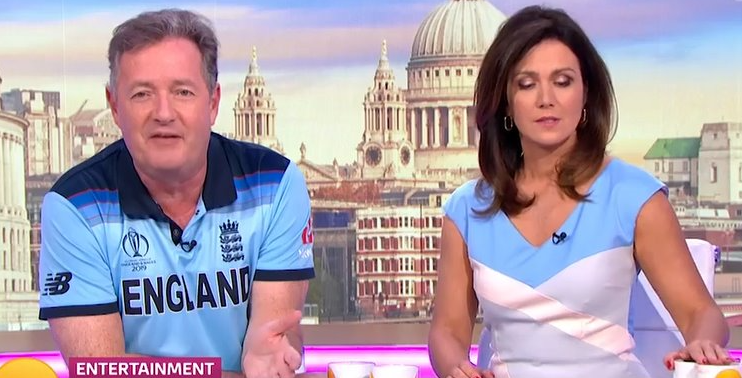 He made a dig at the head of the show

Host Piers Morgan suffered an awkward moment when he was taken off air on Good Morning Britain for criticising the show’s director.

The outspoken broadcaster was cut off mid-sentence following his comment today (July 15).

The crew decided to give the 54-year-old a taste of his own medicine after he slammed head of the show, Erron Gordon.

Piers teased: “We’ve got our director back today, Erron, last week he directed the big debate and then he tweeted it was his career highlight.

“So his career highlight doesn’t involve the people he works with every day, it’s alright, we’re not taking it personally.

“I was going to take you to the White House for my next interview with Trump but… that’s showbiz, you’re gone.”

Suddenly, a ‘technical difficulties’ sign flashed on the screen in an attempt to drown the presenter out.

After the interruption, Piers grumbled and had another dig. He retorted: “Technical difficulties?

“There’ll be directorial difficulties, trust me.”

It’s not the first time Piers has had a run-in with show bosses. He threatened to move over to the BBC earlier this year, after complaining about having orders barked at him through his ear piece.

But today’s fiasco wasn’t the only embarrassing moment Piers experienced.

He also had a cringeworthy moment during an interview segment with musical theatre legend Andrew Lloyd Webber.

The West End producer sat at a keyboard and they sang a line from Jerusalem together, but when Sir Lloyd Webber played the famous tune Don’t Cry For Me Argentina the GMB host made a major faux pas.

Piers began to belt out the musical number from Evita, but he ended up red-faced when Lloyd Webber corrected him on the lyrics live on air!

Piers began warbling: “The truth is I never loved you!”

The correct line is: “The truth is I never left you.”