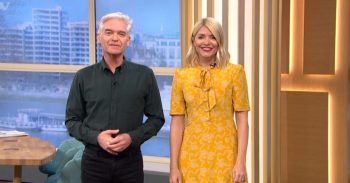 Phillip Schofield forced to apologise after swearing live on This Morning

Some viewers thought he forgot he was on air!

Phillip Schofield accidentally let slip a naughty word as he dropped his pancake during a chaotic relay race on Tuesday’s This Morning.

The presenter, 56, swore when his pancake leaped out of his frying pan as he tried to beat co-star Holly Willoughby around the obstacle course outside the studio.

As his pancake dropped out of the pan, Phil shouted: “Oh [bleep]!”

If you missed it, Phil said the s-word which rhymes with “hit”, but he added the letter ‘e’ on the end.

Arriving back at the finish line, Phil told his team mates Vanessa Feltz and Trinny Woodall: “I dropped it.”

Admitting his naughty slip of the tongue, Phil added: “I did swear half way round, I am sorry.

Viewers were in hysterics over Phil’s swearing and shared their thoughts on Twitter.

One person said: “@Schofe and @hollywills tossing pancakes on @thismorning was the funniest thing I’ve seen in ages!!! Phil’s response to dropping his pancake ‘Oh [bleep]!”

Another said: “Phil saying [bleep] live just made my day,” while a third added: “Think Phil forgot his mic is still on. ‘Oh [bleep].'”

Earlier in the show, Phil and Holly were left speechless when Dancing On Ice judge Jason Gardiner took a swipe at former contestant Gemma Collins after they fell out on the show in January.

Speaking about all the eliminated contestants coming back for the final, Phil told Jason: “Gemma’s back. The GC.”

Jason replied: “Who? Oh, I thought that was a refrigerator,” as Holly and Phil looked tried to keep a straight face.

Jason said: “She said it. No, look, I don’t hold a grudge, I don’t really know the girl.

“She falsely accused me of something, so be it, but I’ve moved on and there’s more important things to worry about.”

Gemma had accused Jason of “selling stories” about her but he denied the allegation.