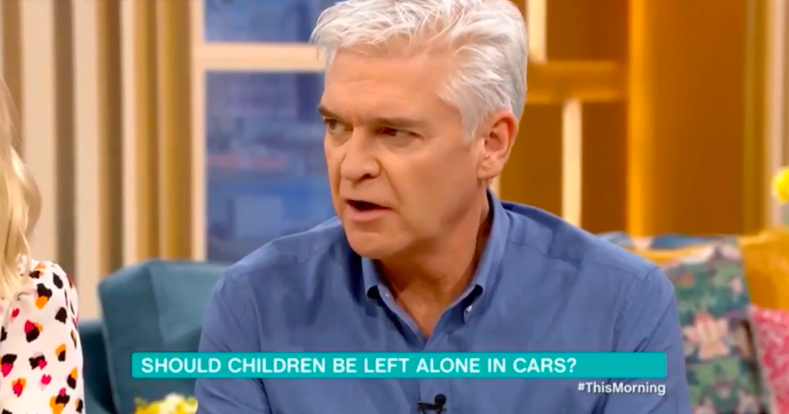 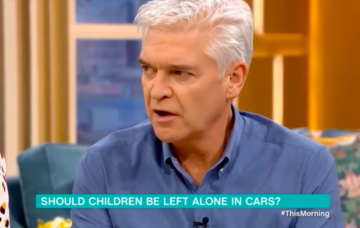 The host cut her off after bizarre statement...

Phillip Schofield didn’t become one of the most loved presenters on TV without being cheeky, compassionate and ridiculously likeable – so it’s not often that he bares his teeth.

But that’s exactly what happened today when a guest on This Morning made a comment so baffling it caused Phil to intervene and hastily change the subject.

On Wednesday (27 February), Phillip and Holly chaired a live debate about the controversial subject of leaving kids alone in cars.

Is it ever okay to do this, even for just a few minutes?

The news item came just days after mother-of-two Yasmin Graham received a huge backlash online, after a picture of her children alone in a car was posted on a Facebook group by a ‘concerned citizen’.

While Yasmin has since insisted she did nothing wrong, the subject has proved to be a divisive one – and the This Morning studio was no exception.

Arguing against a child ever being left alone in a vehicle, Lottie Daley believed it’s never okay to do so.

When Georgina Fuller, who also took part in the debate, argued that she parented like her mum did in the 80s, Lottie made the alarming decision to bring up paedophile Jimmy Savile.

After Georgina had made her case, Lottie mentioned the BBC entertainer, who spent decades grooming, molesting and raping children.

Lottie told Phil and Holly Willoughby: “In the 80s, absolutely [it was acceptable].

But Phillip quickly intervened and told Lottie “that is a very different argument”.

He added: “Savile never took anybody out of a car, he did horrific things, but that wasn’t one of them, that is a slightly different story.”

Fans watching at home were equally miffed, with one writing: “What a total idiot bringing Jimmy Savile into the convo. What has he got to do with leaving a kid in a locked car while you nip to the toilet?”

Another said: “My mum used to leave me in the car all the time and I turned out okay. Jimmy Savile never abducted me.”

What a total idiot bringing jimmy savile into the convo, what has he got to do with leaving a kid in a locked car while you nip to the toilet?#ThisMorning

Woman on #thismorning arguing there was no crime in the 80s and the proof of this? Jimmy Savile was on tv. Guessing she was a last minute booking…

A third typed: “Jimmy Savile and cars are totally unrelated.”

“Don’t give Jimmy Savile any [bleep] airtime,” blasted another.

Do you think it’s okay to leave children in cars? Leave us a comment on our Facebook page @EntertainmentDailyFix and let us know what you think!