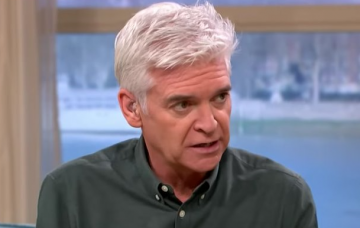 He thinks it's just a phase

Phillip Schofield has had his say about Gemma Collins breaking up with boyfriend James ‘Arg’ Argent.

He gave his opinion on the couple’s separation while hosting This Morning with Holly Willloughby today (26 February).

Phil, who worked alongside Gemma on Dancing On Ice, gave his thoughts on whether they would get back together.

The 56-year-old presenter said he isn’t convinced their split is for good as neither of them have announced it.

While discussing the pair’s latest drama with Holly and Vanessa Feltz, Phil said: “They’ll get together, I have no doubt.”

Phil’s scepticism comes as reports claim things are over between the TOWIE couple, who have been on and off for years.

Gemma, 38, reportedly kicked 31-year-old Arg out of her Essex home after he shared an unflattering video of her snoring on Instagram.

According to The Sun, he is then said to have sent her a string of nasty messages calling her a “fat lump” when she ended things.

A source told the publication that the messages said: “You are a fat joke of a woman. An absolute car crash! You’re nearly 40 [expletive] years old, you embarrassment.”

It’s quite a contrast, considering Arg declared his love for Gemma on This Morning on Valentine’s Day just days ago.

He told Phil and Rochelle Humes, who were hosting at the time, how “proud” he was of Gemma for her accomplishments on Dancing On Ice and how he was planning an exciting rest of the year with her.

Earlier this month, Gemma even said they were thinking of starting a family together.