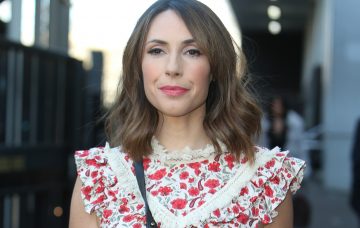 She's pregnant with her second child

Pregnant Alex Jones has revealed she went to hospital after she couldn’t feel her baby move.

The One Show presenter, who is expecting her second child, shared a photo to her Instagram Stories on Tuesday showing herself lying in a hospital bed with a foetal heart rate monitor attached to her growing stomach.

She told fans she hadn’t felt “much movement” from the baby for a few days.

Read more: Oti Mabuse ‘to replace Alex Jones on The One Show when she goes on maternity’

She wrote: “Hadn’t felt much movement from the baby for a few days so lying here being monitored.

“If in doubt mammas ALWAYS check! So reassuring to hear the heartbeat.”

A few hours later, Alex posted a message to assure fans her little one is fine.

She wrote: “All was fine at the hospital. His or hers little heartbeat was going like the clappers but good to check. Thanks for the messages.”

In December, Alex announced she was expecting her second child with husband Charlie Thomson.

The couple are already parents to their two-year-old son Edward.

In a video shared to her Twitter at the time, Alex said: “So we’ve got a little bit of news.

“Charlie and I are expecting another little baby in the new year – a little brother or sister for little Teddy.

“Don’t know the sex of the baby yet. Probably won’t find out because it was nice to have a surprise last time.

“I didn’t know when to tell everybody and when to share the news. I was a bit nervous about it and I didn’t want to do it too soon but as every mum will know you get to a certain point and you just pop.

“I’ll show you, (shows off bump) which is what happened, look, this weekend, there it is, there is no hiding it any more.

“But I’m quite glad actually as I can just breathe out and I can eat all of the Christmas food.”

Meanwhile, last month, Alex said she was an “emotional wreck” as she celebrated her son Edward’s second birthday.

Our little boy is 2 and I’m an emotional wreck! It’s amazing to see him grow and turn into a little boy but a big part of me wants to stop time marching on and hold him close forever. Happy birthday Teddy 💙 Penblwydd hapus cariad bach.

Alongside a picture of her little boy, Alex wrote: “Our little boy is 2 and I’m an emotional wreck!

“It’s amazing to see him grow and turn into a little boy but a big part of me wants to stop time marching on and hold him close forever. Happy birthday Teddy.”