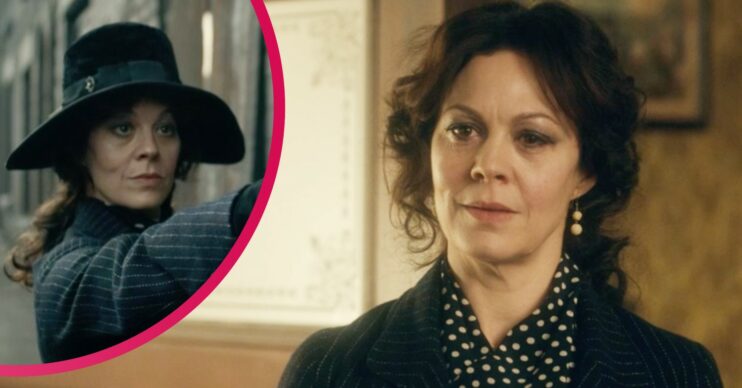 Polly get your gun!

As Peaky Blinders returns this weekend, Polly Shelby aka Polly Gray – one of the BBC drama’s most iconic characters – will sadly be missing.

Cillian Murphy, who plays Aunt Polly’s nephew Tommy, has said the sixth and final season will be a “brilliant tribute” to both Helen and the character of Polly.

Here’s our own tribute, with Aunt Polly’s most iconic moments.

*** spoilers ahead from all five seasons ***

As character entrances go, they don’t get much better, or cooler, than this!

John Shelby (Joe Cole) exits an alleyway and steps out onto the street, and a gun is suddenly put against his head. And holding that gun? Polly, of course.

“Look at the gun,” Polly says, before clipping her nephew round the back of the head, sending him sprawling. Polly then gives John a telling-off for being irresponsible and leaving guns lying around.

The scene hardly even lasts a minute and yet, at the end of it, you know exactly who the boss of the family is. The cocksure John is nothing but a guilty schoolboy in Polly’s presence, as are many for that matter.

Coincidentally, Polly’s first scene on the show was one of Helen’s favourites too. “My most memorable scene is the first one I filmed,” she said in an interview with the Birmingham Mail in 2019.

2. Polly lets Tommy have it in The Garrison

Another iconic moment for Polly happens, once again, in series one.

In the fourth episode of the show’s maiden series, Ada (Sophie Rundle), the younger Shelby sister, has a baby. Tommy allows the father, Freddie, a communist, to see his son. However, shortly after, the police raid the house and arrest him.

Polly, furious at Tommy for having Ada’s lover taken away, storms into The Garrison pub, hellbent on giving Tommy a piece of her mind. The fury in her eyes leaves even Tommy stunned.

“You liar,” Polly says, spitting at Tommy’s feet before taking her leave. Not many would dare talk to the leader of the Peaky Blinders like that. But Polly would, and did, and that’s why so many fans adore her.

At the end of the first series, Polly uncovers the truth about Grace – that she was working for Campbell.

Polly confronts Grace about her secret and gets a gun pulled on her for her trouble. But does that bother Polly? not likely!

“I’m not afraid of you,” Polly tells Grace. Even with a gun in her face, Polly is still in complete control, and soon it’s Grace who is afraid, not Polly.

As the women sit down to have a drink, Polly threatens to kill Grace if she doesn’t leave the city. If viewers, and Grace, didn’t know whether to take Polly seriously at first, they definitely do now.

The moment Polly kills Inspector Campbell at the Derby is an iconic moment for the character and had many a fan of the show punching the air.

In episode five of season two, Inspector Campbell sexually assaults Polly. Despite having her son, Michael, released from prison as a result of the sexual assault, Polly isn’t going to let it slide.

In the finale of series two, while at the races, Polly finally gets her revenge on Inspector Campbell. The Shelby matriarch corners Campbell in a phone booth and shoots him dead.

Polly walks away from the scene of the murder with Campbell’s blood on her dress, and the inspector slumped dead in the booth behind her.

In the penultimate episode of the third season, Polly gives fans another look at just why she’s so respected within the Shelby family.

Tommy has plans to kill the priest to get what he wants, and Michael, Polly’s son, has volunteered to pull the trigger.

But Polly isn’t going to let her son become a killer, and she makes Tommy aware of that in no uncertain terms.

“If my son pulls the trigger, I will bring this whole [bleeping] organisation down around your ears,” she says, in a truly spine-tingling moment.

At that moment, we, and Tommy, can’t help but believe her. This is arguably one of Polly’s most powerful scenes in the whole show.

5. The Peaky Blinders confront the Sisters of Mercy

In season five, Polly and Tommy learn that the children in St. Hilda’s orphanage are being mistreated. They go there to confront the Sisters of Mercy and make them aware that they’re pulling funding.

Polly also tells them that the children will be removed from the orphanage.

When the Mother Superior refuses, Polly issues her with possibly the coolest-sounding death threat ever.

“If I come for you – and I still might yet decide to come for you – I will wear high heels so you can hear my approach on the cobblestones and have time to repent. You listen for my footsteps.”

It should be a happy moment for Polly, getting engaged to Aberama Gold and securing peace between him and the Peaky Blinders.

However, things take a turn for the worse when Linda, Arthur’s wife, turns up. She’s angry and looking for revenge.

Linda pulls a gun at Arthur in a tense moment where all hope looks lost for the older Shelby brother.

Just as Arthur closes his eyes, accepting his fate, a gunshot rings out in the darkness.

And out of the shadows, emerges Polly Shelby.

Perhaps this is her most iconic moment on the show.

What do you think is Polly Shelby’s most iconic moment? Leave us a comment on our Facebook page @EntertainmentDailyFix and let us know what you think.