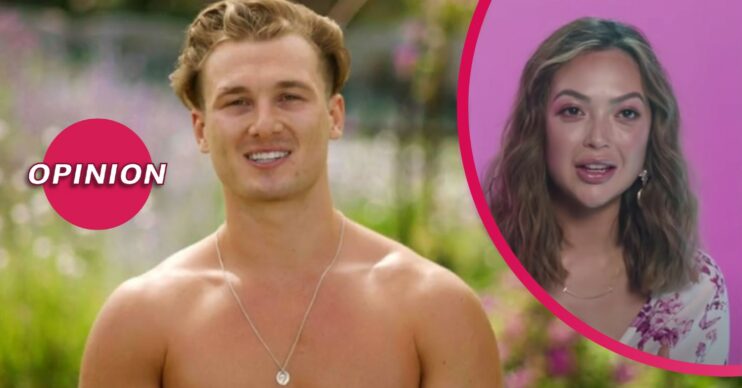 OPINION: Love Island: ‘Chuggs will struggle to find love with his attitude’

Chuggs is coming in to the villa

Love Island episode three kicked off last night (Wednesday, June 30) and it was revealed two new boys, including Chuggs, will be entering the villa.

Here is Charlotte Rodrigues’ first impression of the new lad.

Love Island revealed new boy Chuggs will be coming into the villa, alongside Liam. However Chuggs was the one who caught really my attention.

Immediately Chuggs comes across as the stereotypical upper class boy, mummy and daddy pay for everything, you get what I mean?

The 23-year-old is from Surrey and revealed he owns his own business. The young man sells bucket hats for a living and somehow that does not surprise me.

But how well is he going to do on the show? Well, not very well (in my opinion).

Chuggs will struggle to find love

One of the first things Chuggs said in his introduction was: “The person I care most about is me.”

Could just be me but that strikes me as a red flag.

He did follow saying he has no problem going after a girl who is in a couple and doesn’t want to make friends, which goes to show he’s not scared to tread on anyone’s toes.

However, if someone is constantly putting themselves first, I fear we could be looking at another Michael Griffiths or Josh Denzel.

For those of you who don’t know, both Michael and Josh were in previous series and claimed to be happy in their couples.

But when they went into Casa Amor, they ended up recoupling while their girls stayed loyal.

I don’t think Chuggs will get on so well with the rest of the boys and I can see him playing a few games with the girls.

However, if it brings new drama into the series, then bring it on! We need a love triangle, let’s get the drama going!

Prediction for the next few episodes

I have previously written an article on Sharon Gaffka, who I personally really like.

She strikes me as a ‘rah, where’s my baccy’ girl and Chuggs gives me the same kind of vibes. However, Sharon doesn’t come across as selfish and seems to be a girls’ girl (which I love).

I feel as if these two could actually hit it off. Sharon is a clever girl and Chuggs must be pretty clever to have his own business at the age of 23. Do I think it would last though? No.

I could also see him catching the eye of Chloe. Chloe and Brad were having chats last night and after the challenge he made it EXTREMELY clear he finds Chloe the most attractive out of all the girls.

Could Chloe’s head be turned by Chuggs? I guess we’ll have to wait and see.

Love Island airs on ITV2, every night, at 9pm.