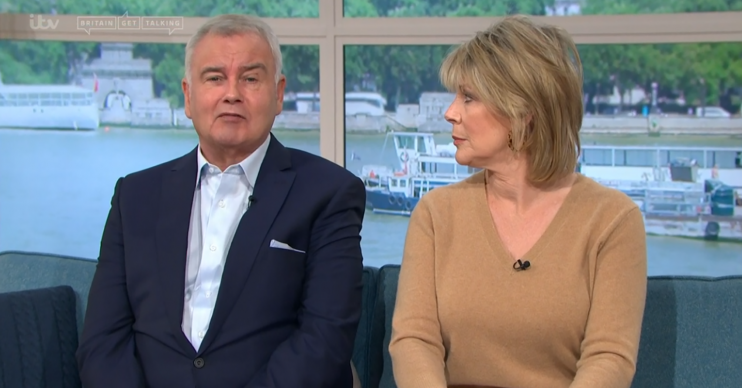 419 people complained to the watchdog

TV’s Eamonn Holmes has sparked Ofcom complaints over comments he made about a coronavirus conspiracy on This Morning.

There have been suggestions that 5G WiFi networks are linked to the spread of coronavirus.

Scientists have insisted the theories are “complete rubbish”.

However, Eamonn said on the show: “What I don’t accept is mainstream media immediately slapping that down as not true when they don’t know it’s not true.”

He later hit back on Twitter after people accused him of “fuelling” the conspiracy.

Eamonn wrote: “I didn’t spread it…. I reserve the right to listen and question.”

We are assessing this programme in full as a priority.

However, Ofcom received 419 complaints from viewers over Eamonn’s comments.

A spokesperson for the watchdog said: “We are assessing this programme in full as a priority.”

Eamonn also cleared things up on Tuesday’s This Morning (April 14).

He said at the start of the programme: “I want to clarify some comments that some of you may have misinterpreted from me yesterday, around conspiracy theories and coronavirus, and this involved the rollout of 5G.

“Both Alice Beer and myself agreed in a discussion on this very programme on fake news that it’s not true.

“Every theory relating to such a connection has been proven to be false and we would like to emphasise that.

“However, many people are rightly concerned and looking for answers and that’s simply what I was trying to do, to impart yesterday.

“But for the avoidance of any doubt I want to make it clear there’s no scientific evidence to substantiate any of those 5G theories.

What have experts said?

He told the BBC: “The idea that 5G lowers your immune system doesn’t stand up to scrutiny.

“Your immune system can be dipped by all sorts of thing – by being tired one day, or not having a good diet.”

What do you think about the 5G conspiracy theory? Leave us a comment on our Facebook page @EntertainmentDailyFix and let us know.