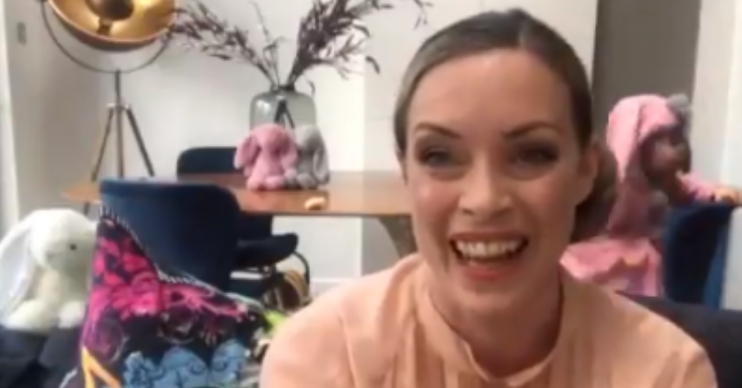 Host Ruth Langsford was in hysterics

Sharon Marshall’s daughter had This Morning hosts Eamonn Holmes and Ruth Langsford in hysterics today as she gatecrashed their interview.

The soap expert was live from her house as she gave a preview of the new series of Killing Eve.

But she hadn’t banked on a little Easter bunny invading her ‘set’ – her daughter Betsey.

Betsey is 15-months-old and clearly hadn’t got the memo that mummy was on the telly!

As Sharon tried to carry on the chat with the hosts in the studio, Betsey wandered into the shot wanting a cuddle

Sharon explained she had made a mistake mentioning that she’d got bananas ready for the cooking segment coming up later, but now Betsey wanted a banana.

After giving her daughter a quick hug and putting her down, Sharon tried to keep going, but Betsey was soon climbing furniture in the background!

Laughing Ruth said: “What’s she doing? She’s dressed up as an Easter bunny!

“Ooh, steady, she’s climbing up the chair,” she added as Sharon ran behind the sofa to rescue her little one.

Eammon tried to wrap things up, telling Sharon: “Thank you for the preview, and thank you for the entertainment with you and junior there. It’ll be great to show at her 18th birthday.”

Fans at home thought it was brilliant, though.

Haha the joys of kids! She’s getting so big!

How cute is Betsey x

Hilarious…… kids 🙈 so unpredictable but adorable 🥰

Back tomorrow – minus Betsey!

And Sharon herself saw the funny side as she told viewers she’d be back on This Morning tomorrow.

But she insisted it would be at 12 when Betsey is due to take a nap!

Elsewhere on today’s show, fans were left in tears as Britain’s Got Talent act Sign Along With Me did a special performance.

The choir, which was started by Jade Kilduff for her brother Christian to help him communicate, united by the power of technology to sing A Million Dreams from The Greatest Showman.

The whole Kilduff family even joined in with the act, bringing the nation to tears once again.