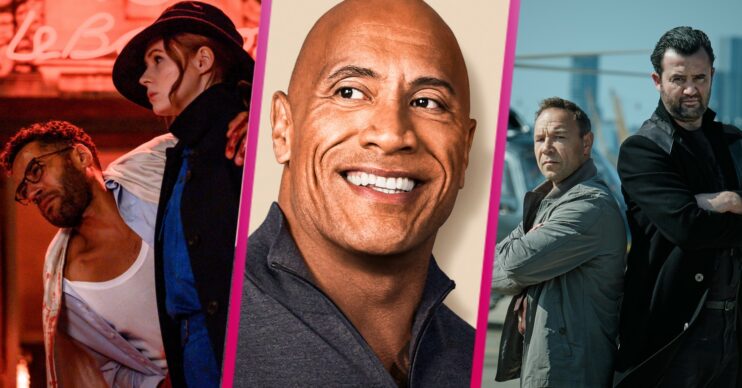 NOW and Sky in September 2021: Arrivals from Nevermind The Buzzcocks to Gunpowder Milkshake

There's some big things coming this month for the streaming service

NOW and Sky in September is well and truly spoiling us – and we’ll be lucky to tear ourselves away from our sofas.

There’s the hyped-up return of an absolute TV classic, and then a whole host of films we’ve been dying to see for months.

Basically, there’s something for everyone and no excuse not to find something to watch.

Want to know more? Here’s all the best shows and films coming to our screens this month…

What TV shows are coming to NOW and Sky in September?

Line Of Duty’s Stephen Graham and Daniel Mays star as a detective and his AI-driven partner in this sitcom.

In season two, the pair face a 20-year-old case reopening.

Turns out that it has a significant connection to one of them.

Soon, it could be the ending of both of them as they end up facing danger not just from each other but from other forces.

Comedian Russell Howard returns for more light-hearted news updates and a unique take on what’s going on in the world.

Thankfully, he’s got plenty to talk about…

The history of Dwayne ‘The Rock’ Johnson is played out in this sitcom of his life.

This show aims to bring the laughs as we figure out what made The Rock the man he is today.

Naturally, in order to prove something to himself, he decides to run for Mayor of Los Angeles.

But is it all it’s cracked up to be?

With a brand new line-up, set and home, classic music gameshow Nevermind The Buzzcocks is back.

Greg Davies is hosting with Daisy May Cooper and Noel Fielding as team captains.

Joining them include guests like Anne-Marie, Jade from Little Mix and Nish Kumar.

We’re ready for some trouble.

Mel Giedroyc and Sue Perkins reunite for the first time since Bake Off in this new comedy.

The pair play misfits Jamie and Fran – quirky contract killers getting ready for their school reunion.

However, once there, things soon start to go sideways.

What documentaries are coming to NOW and Sky in September?

Hawking Can You Hear Me? (September 20th)

Family, friends and colleagues of world-famous cosmologist Stephen Hawking speaks about his life and career.

The candid look aims to see what made Hawking the international legal he is today.

The Bambers: Murder At The Farm (Date TBC)

Using first-hand testimony and unseen footage to re-examine the events that took place in 1985.

The film tracks the evidence around Jeremy Bamber, and what exactly happened that fateful night.

The details of the brutal killings have since been made into a TV series, White House Farm.

Read More: Netflix in September 2021: Everything arriving from Lucifer to Sex Education

What films are arriving on NOW and Sky in September?

But is it as fun the second time around?

Emily suffers from anxiety as a result of her husband being released from prison early.

In a bid to curb it, her psychologist gives her an experimental drug.

But in this thriller, the side effects may be worse than the initial problem.

The movie follows Frank, who is tasked with protecting a famous singer whose life has been threatened.

But soon love gets in the way.

A man wakes up on the morning of his wedding, only to discover he has a new ability.

Every few minutes, his life fast forwards a year.

Will he be able to slow things down before it’s too late?

Read More: Amazon Prime Video in September: Everything arriving from Cinderella to the full Charmed boxset

Based on the true story of the takedown of Fox News CEO Roger Ailes.

Nicole Kidman, Charlize Theron and Margot Robbie star as the women brave enough to speak out.

A Korean-American family move to Arkansas in a bid to find their own version of the American Dream on a farm.

Read More: Apple TV+ in September: From The Morning Show season 2 to Come From Away

Karen Gillan and Lena Headey star in this action thriller about a hitwoman who is forced to go rogue when her latest mission goes awry.

With an eight-year-old caught in the crossfire of her own wrongdoing, she now has to protect her from gang warfare.

James Corden and Melissa McCarthy star in this sitcom.

Deciding to focus on the world’s most average person, a super intelligence bot soon finds the world in its hands.