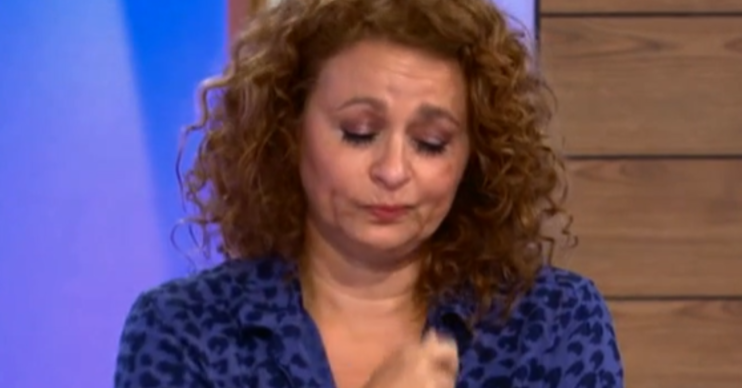 It all got a bit much for the panellist

Denise Welch was a guest on Loose Women today, talking about her 31-year battle with depression.

But when talk turned to Nadia Sawalha and her husband, Mark, who has also fought with depression, a choked-up Nadia was unable to speak.

Read more: This Morning’s Phil makes slip of the tongue

Denise reveals her experiences of depression

Denise has written a book about her own experiences after she posted a series of videos to social media last year, showing her in the middle of an episode.

Her openness sparked interest and she was asked to write about it in The Unwelcome Visitor: Depression and How I Survive it.

Denise said: “Obviously I have no medical knowledge, I’m in no position to tell anyone how to survive it, but if anyone can gain solace from my experience…

“It started when I gave birth to Matty 31 years ago. Prior to that I’d had no episode of depression. I didn’t know the true meaning of depression until I had very severe postnatal depression.”

Denise then said that episode opened up a “tendency” for her to have depression and she’s lived with it for 31 years.

The former Coronation Street star then described a “horrible moment” where she’d tried to throw herself out of a taxi.

“People say, ‘Were you trying to end everything?’ I wasn’t. I was trying to stop the pain. Only people who have had severe depression will know how that feels.”

She added: “I would have given anything to have turned on my TV, to see someone I recognised talking about an illness they lived with, how they enjoyed the bits in between.”

She also said it was important not just to share “the lovely times of your life”, but the other side too.

Tearfully, Denise added: “The main thing was when I couldn’t love my child and that does affect me… when you have this baby, that you have wanted so badly, and you have no love, because what depression does is it depresses every single emotion, so it’s not striving for happiness, it’s striving for normalcy – it’s striving for the ability to be happy, to be sad, to care, to feel jealous, to feel anger, because with depression you feel nothing.

“And that’s why you feel that life can be not worth living, unless you have a family like mine who said every day, ‘You will get better’.”

Denise concluded: “You can survive it and you can make the most of your life in between the episodes… I want to say a thank you to Loose Women and you girls for giving me a platform to speak about my own experiences but for making this show about lightening the load as well, I’m very proud to be a part of it.”

She also asked Ruth and Nadia how they coped living with people who had depression. Ruth’s sister took her own life last year after a long battle with the illness.

Ruth talked about it openly and said she felt she made mistakes by trying to “chivvy her up” and fix it.

Read more: This Morning fans back Judge Rinder as he takes Matthew Wright to task

Ruth then turned to Nadia and said: “Nadia, you talked very openly about Mark’s depression and about how you and the family deal with that…”

But Nadia couldn’t answer. She was fighting back the tears and was too choked up to reply.

“Are you all right?” Ruth asked. “It’s so hard, people just want to give support and give love and sometimes you can’t help people.”

As the show ended, Ruth once again asked Nadia if she was all right.

Viewers at home were full of praise for Denise for sharing her story.

Well that was an emotional episode @RealDeniseWelch @loosewomen . Completely relate with the depression and think you’re doing a wonderful job. Thank you #LooseWomen

What an emotional episode of @loosewomen. Thank you @RealDeniseWelch for your openness and honesty. I look forward to reading your book. Episodes like these are why #LooseWomen is such an important show.

#LooseWomen Well done to @RealDeniseWelch for her words. Anyone with this awful ‘intrusion’ in their lives will appreciate Denise’s honesty. Thank you @RealDeniseWelch❤️