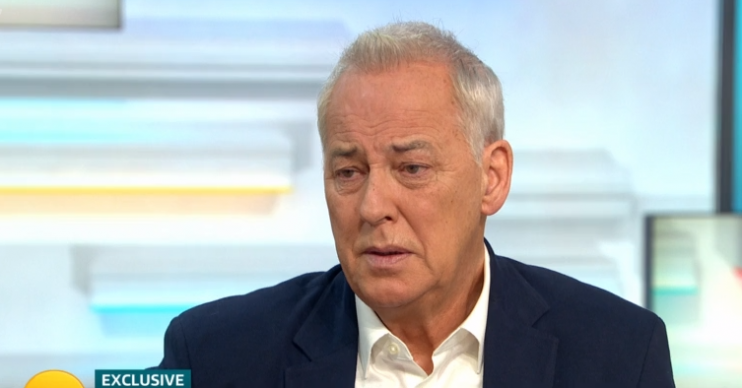 The incident happened in 2001

Michael Barrymore has slammed “Poundshop detectives” on Twitter as he told of his “pain and agony” over the death of Stuart Lubbock in his pool on Good Morning Britain.

The former Strike It Lucky presenter fought back the tears as he questioned “how many times [he] is supposed to be kicked” by trolls, and admitted he has only got through the past 20 years because of the “massive support” he’s received from friends and fans.

Michael’s career was left in tatters after he was arrested on suspicion of rape and murder after Stuart’s lifeless body was found in his swimming pool in 2001. But he was released without charge.

Michael Barrymore: ‘not a wrong’un’

He told hosts Piers Morgan and Susanna Reid: “The only reason I got through the last 19 years, coming up 20 years, is the massive support out there from fans and my close mates, and my fans are my mates. We’ve had this relationship for years.

I’m a big boy and I’m going to hold my head up high and walk out on the street.

“They, through their support, not all the ones from Twitter street – you know, the Poundshop detectives who take a bit of this and bit of that. ‘Oh, it’s a celeb who needs another kicking.’

“I’m a big boy and I’m going to hold my head up high and walk out on the street. I’m entitled to and it’s my right to.”

'The only reason I got through the last 20 years is from the support of my fans.'

The 67-year-old TV presenter insists he has been “as honest as [he] can” and has “never had anything to hide”, and admitted that no matter “how bad” the situation is for him, it will never be “as bad” as it is for Stuart’s father and his family.

“I’ve been as honest as I can. I’ve only got the one story… don’t know anything else, otherwise I would’ve said. I’ve got nothing to hide. I’ve never had anything to hide.

“I have got every right to go out and to be employed and work in the business I work without every time being kicked in the teeth, just because I’m back on telly.”

He also admitted: “It doesn’t matter how bad it is for me it’s never going to be as bad as it is for Mr Lubbock and that family. Never. I know that, and I’m aware of that.

“Why would I hide or keep anything and put myself through this pain and agony every time this comes up.”

‘Could not be more sorry’

In June last year, Michael said he “could not be more sorry” about Stuart’s death.

“It was at my house and they don’t have all the answers to how he got these injuries. I could not be more sad or sorry if I have to be for the rest of my life.

“I’m sorry. I could not be more sorry. I’m sorry for swearing. I do apologise. I’ve never swore in front of an audience.

“I was responsible for allowing people to come back to my house and to go out to the pool. All of them were… there were no children. Stuart was 31. You assume they was capable of looking after themselves.”

Read more: Michael Barrymore breaks his silence on Channel 4 documentary Barrymore: The Body In The Pool

No need for remorse

But Michael insisted he doesn’t feel “remorse” over the incident because he didn’t do anything “horrific”.

He said: “You know, some people say, ‘You did not show any remorse.’

“But the word remorse applies to when you have actually done something horrific. So how do you show remorse?”

Last month, police confirmed they were chasing new leads into the death of Stuart.

This story is being updated as police made an arrest on March 17, 2021.