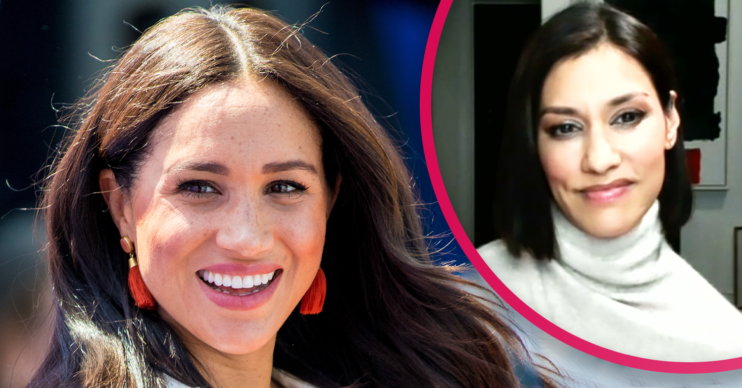 The interview was an opportunity for the couple to tell their 'truth', she explained

Meghan Markle’s friend Janina Gavankar appeared on This Morning on ITV today (March 10) and backed up the comments about the royal family made in the recent Oprah interview.

In the interview, Meghan spoke about her mental health, claimed she wasn’t helped by the institution and made allegations about a racist comment about the colour of Archie’s skin.

Last night the palace released a statement about the interview.

And now it appears to be the turn of Meghan’s friends to have their say.

What did Janina Gavankar say on ITV This Morning today?

Chatting to hosts Holly Willoughby and Phillip Schofield on This Morning, Janina backed the duchess and first opened up about the comments on her mental health while pregnant.

Asked about comments she wasn’t offered help by the royals, Janina said: “I believe she said she had no one to turn to within the institution.

Janina added that she was “worried, terrified, sad” for Meghan.

She then turned her attention to the Buckingham Palace statement.

“After reading this short statement that came out from Buckingham Palace I thought two things.

“I am so thankful they are finally acknowledging the experience, but on the other side I also know that the family and staff were well aware of it.”

Read more: Royal expert predicts Harry and Meghan will be welcomed back into the family

She added: “And, while their recollections may vary, ours don’t because we lived through it with them. And there are many email and texts to support that.”

Phil then asked if the whole family knew Meghan was “deeply struggling”.

“I don’t know who knew but I knew that the family and the staff knew.”

Janina on ITV This Morning: ‘We get to tell the truth’

Asked how Meghan and Prince Harry are feeling post-interview, Janina confirmed they are “happy”.

She said: “We’re all happy we’re in a new era. We get to tell the truth.

She was then questioned over the timing of the Oprah interview, with our elderly monarch dealing with the fact her 99-year-old husband is in hospital.

I don’t think the intention was to nuke them, I think it was finally a chance to tell their truth.

And she stated that she didn’t think the intention was to “nuke” the family.

“I don’t think the intention was to nuke them, I think it was just finally a chance to tell their truth.

“Meghan has always been a very open person but that all changed when she joined the family.

“We watched as a wall was built around her, she was very isolated and even though that wasn’t her choice she was being completely slaughtered for it.

“I wanted to defend her but she was told to tell us to never make a comment because the institution would protect them but years later we know that was not the truth.”

Asked how the couple are now, she confirmed: “I think they are feeling great. It’s nice to see them feel free. It’s actually a really good time.”

Janina was then questioned about the bullying allegations that have been levelled at Meghan.

And she said that she “can say” that Meghan is “not a bully”.

Janina said: “Well I have known her for 17 years and have seen the way she regards the people around her and the people who work for her and I can say she’s not a bully.”

She then dropped another bombshell.

“But I can also say that I am personally glad that people are doing their due diligence because I also know why someone had to leave and it was for gross misconduct and the truth will come out.

“There are plenty of emails and texts about that,” she claimed.

“I’m not going to get into the details of it, I don’t feel like that’s my place. I’m just happy it’s getting looked in to because the truth really does set you free.”

Phil then asked if there were “more truths to come”.

Janina replied: “Yes. I really do feel like we’re in a new era.”

ED! has contacted reps for Harry, Meghan and the royal family about this story.