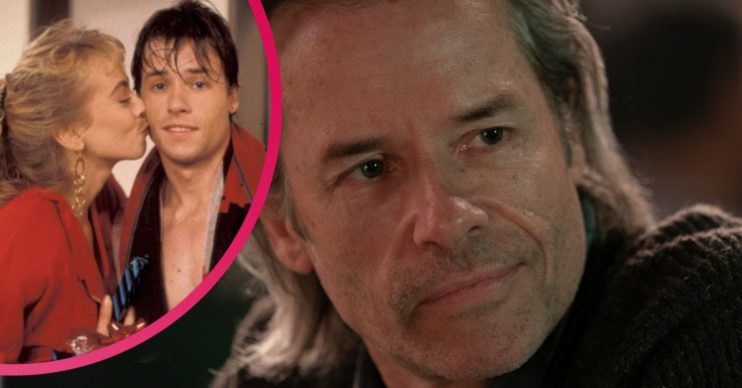 Mare of Easttown’s Richard Ryan: Who did Guy Pearce play in Neighbours and how old is he?

He's actually British, but grew up in Australia - and has a famous girlfriend!

Guy Pearce plays mysterious Richard Ryan in the continuing Sky Atlantic drama Mare of Easttown, but who did he play in Neighbours?

What else has he been in and who is his famous Game of Thrones star partner?

Who is Guy Pearce and what is he famous for?

Guy Pearce is an actor, who has starred in a zillion top class films and TV shows…

But TV viewers still remember him fondly for his role in Neighbours more than three decades ago.

After leaving the soap, he had a brief spell as David Croft in Home and Away, but eventually went on to worldwide fame.

Most notably, he bagged a role in Academy Award-winning L.A. Confidential opposite Russell Crowe.

He’s also appeared in films such as The Adventures of Priscilla, Queen of the Desert, Memento, The Time Machine, The Hurt Locker and The King’s Speech.

Plenty of Oscar-nominated films to choose from, but he’s not a film snob – the actor also portrayed villainous Aldrich Killian in Marvel’s Iron Man 3.

In September 2011, Guy won the Primetime Emmy Award for Outstanding Supporting Actor in a Miniseries or Movie for his work in Mildred Pierce as Monty Beragon opposite fellow-Mare of Easttown actress Kate Winslet.

He played Ebenezer Scrooge in the TV adaptation of A Christmas Carol, and currently portrays Richard Ryan in Mare of Easttown.

Guy also plays Jack Irish in the TV series of the same name.

Who did Mare of Easttown star Guy Pearce play in Neighbours?

Mike was a fictional character from the Australian soap who made his first on-screen appearance on 20 January 1986.

Guy’s role was during the golden era of Neighbours, when Kylie Minogue and Jason Donovan appeared as Charlene Mitchell and Scott Robinson.

Mike’s storylines included being physically abused by his father, moving in with Des and Daphne Clarke, his relationship with Jane Harris and becoming a teacher.

He departed Erinsborough to be with his mother on 6 December 1989.

In fact, the Neighbours producers did not want Guy Pearce to play Errol Flynn in a biopic film so Guy decided to leave the show.

“I’m not embarrassed by having done it now, not at all,” Guy has previously said.

“It was an amazing experience, an amazing opportunity. And I was only 18.”

How old is Mare of Easttown star Guy Pearce?

Is Guy Pearce married? Who is he married to?

Guy’s partner and mother of his child is Game of Thrones actress Carice van Houten.

Yes, the rather intoxicating Melisandre!

The pair welcomed their first child together, a son called Monte, in 2016.

Before Carice, Guy was previously married to his childhood sweetheart, psychologist Kate Mestitz.

They wed in March 1997, but he confirmed they had ended their marriage after 18 years in October 2015.

Where is Guy Pearce from? What nationality is he?

Guy Pearce was actually born in Ely, Cambridgeshire, in England.

His father, Stuart Pearce, was a New Zealand Air Force pilot and RAF test pilot, and his mother, Anne Cocking (née Pickering), was an English schoolteacher.

The family relocated to Australia when Guy was three years old.

Tragically, Guy’s father died in an aviation accident when Guy was just eight.

Mare of Easttown continues on Monday April 26 2021 at 9pm on Sky Atlantic.