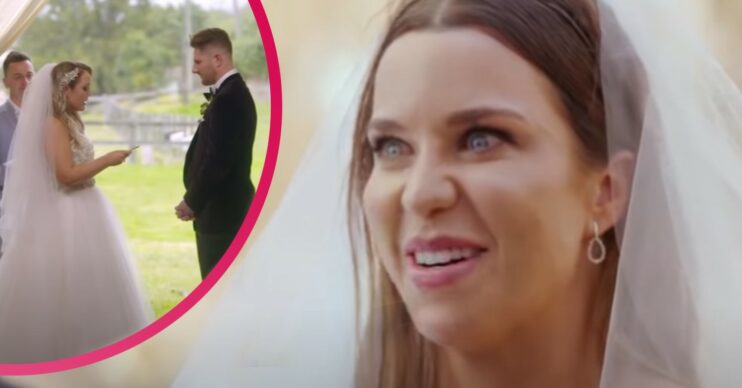 MAFS Australia season 8: As Coco ruffles feathers, meet the rest of the cast

The E4 show is back and we couldn't be more excited!

MAFS Australia season 8 is airing on our screens right now after it returned last night (October 4).

The series originally hit TV screens Down Under earlier this year where it bowed to blockbuster ratings.

She also made an impression during a sneak peek for tonight’s episode (October 5) at the end of the show.

But as Coco appears to become one of the biggest characters on the show, here are the rest of the contestants who are praying they will find love.

Johnny is a theatre producer from Brisbane who is desperate to find Miss Right.

He’s already been divorced once after his first marriage fell apart.

Since then he’s been extremely picky about who he dates, and it’s left him journeying through life alone.

Liam is a prison officer from Brisbane. He grew up on a farm as a youngster.

He describes himself as an Aussie Bogan, which Down Under means someone who is uncultured or unsophisticated.

We’re not sure what his potential bride will think about that!

Georgia was born into a wealthy entrepreneurial family.

She hasn’t dated much and has been spending the first half of her 20s chasing after her career goals.

She says that she refuses to settle for a man who wants to stifle her dreams.

Kerry says that she is determined to “live life to the fullest”.

She’s a big fan of sports, and loves nothing more than to “drink beer and watch the AFL”.

Belinda is a door-to-door saleswoman by trade, and she currently lives alone with her cat.

Shockingly, she’s never had a serious relationship, or even had a boyfriend at all.

Alana describes herself as “full-on” when it comes to meeting men and says she can be a handful.

However, beneath her eager attitude to find a man to settle down with lies someone with a “heart of gold”.

Booka is a successful musician and regularly tours the country with her heavy metal band as a singer and keyboard player.

She also works in a psychiatric hospital where she helps people with mental health issues.

She may be only 20 years old, but Coco has already been married once.

However, her marriage fell apart because she felt she came in second place to her mother-in-law.

She’s hoping her new man will always put her first.

Beth has always wanted children, however, she is concerned that her window to have them is closing now she’s about to turn 40.

The pressure to meet a man has been weighing on her mind, and she’s looking to find The One to settle down with.

Joanne says she “says it like it is” and is renowned for having “no filter”.

Paired with a “short fuse” and jealous personality, there are bound to be fireworks when she makes her first appearance.

Despite being 31 years old, Melissa has never been on a date.

She confesses that she’s nervous to tell her future husband about her non-existent dating history and hopes she won’t feel judged.

Will her inexperience hamper her new marriage?

Samantha is a divorced single mum who spends her time juggling her career as a property developer with raising her two sons.

She’s strong-headed and wants to find a man who can keep her on her toes.

Rebecca is hoping to find someone with “good banter, cheek and attitude”.

She has a very long list of physical attributes that her partner must abide by to keep her attention.

Rebecca also refuses to settle down with someone who loves to sit in front of Netflix or chews with their mouth open.

Self-confessed unlucky in love Patrick wants to settle down and start a family.

Described as “bubbly, friendly and upbeat”, the personal trainer from Victoria has a “heart of gold”.

Sam is a construction worker who describes himself as “sarcastic and outspoken”.

While he’s a builder by trade, he is also pursuing a dream of being a fashion designer on the side and hopes his new wife will support him.

Jason describes himself as a larrikin, which in Australia means a boisterous, often badly behaved young man.

He’s still living the bachelor life he enjoyed in his 20s and is typically out on weekends having wild nights out.

Another of the show’s “larrikins,” Russell confesses that he is at his happiest when downing a beer or eating a steak.

He is a diesel mechanic who owns his own mechanic and contracting business.

James is a huge fan of luxury cars and designer clothes.

However, he tries to separate his wealthy lifestyle from the early days of dating so that he can attract the “right type of woman”.

Will his new wife be the woman of his dreams or a gold digger?

Cameron says that people often judge him because of his tattoos and shaved head.

However, deep down the crane operator insists that he is just a “teddy bear” at heart if people take the time to get to know him.

Bryce is newly single, having recently ended his engagement.

Despite his heartbreak, he’s determined to settle down and have the “white picket fence” dream with the right woman.

A former AFL player for Carlton and Port Melbourne, Jake chose to step away from his football career to take care of his mental health.

He is now the CEO of mental health charity, Outside The Locker Room.

Brett is an electrician and psychology student with a “real man-sized heart”.

He volunteers with the Salvation Army to assist the homeless, and his dream is to open a treatment centre to help the vulnerable.

Are you excited for MAFS Australia season 8? Leave us a comment on our Facebook page @EntertainmentDailyFix and let us know.