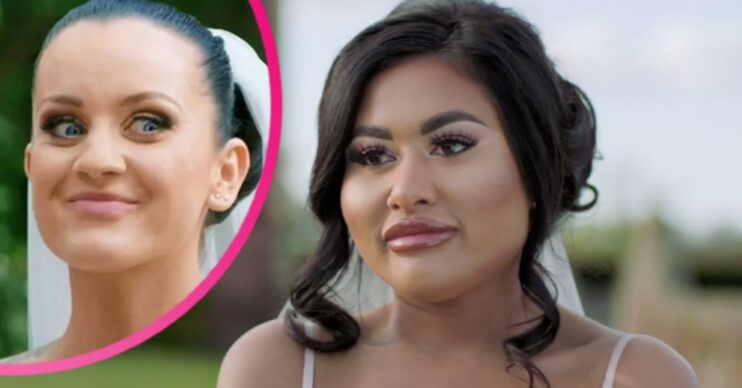 The E4 reality series returned to screens on Monday

The popular E4 reality series returned to screens on Monday (August 30), as 16 new singletons joined the experiment to find love.

During the show’s first episode, viewers watched on as Nikita and Ant tied the knot.

The 27-year-old saleswoman made a lasting impression as she made her debut last night.

Speaking to expert Paul Carrick Brunson, the Geordie went on to list her ideal man.

Nikita said: “I’ve got to be with someone really hench. So they’ve got to have, like a big back, big shoulders, big arms, and also big legs.

Read more: Married at First Sight: Is Mel Schilling in a relationship? How old is she?

She added: “Alright, you know what I’m gonna say as well? They’ve got to have a tan.”

However, Nikita appeared far from impressed as she met her match for the first time.

The saleswoman was paired with Ant, a 28-year-old model and business development specialist from Manchester.

Following their wedding ceremony, Nikita fumed: “They’ve just done the total [bleeping] opposite of what I’ve asked for.

“I mean obviously I was talking about looks quite a lot. Looks was a huge thing to me and I don’t think they’ve listened to what I said.”

One said: “Feel sorry for Ant. He’s got no idea how much of a rude, belittling woman he’s been matched up with. Nikita is vile.”

Another added: “Anyone else find it so disrespectful that Nikita was swearing all the way through her wedding and the after party.”

Nikita is ridiculously rude. Why does she think she is so special?Ants dad doesn’t look pleased 🤭#MAFSUK

Nikita #MAFSUK is an amalgamation of Cyrell and Ines from #MAFSAustralia just awful!

A second wrote: “Trying to figure out whether I’m watching Nikita here or Ines.”

A third shared: “Nikita #MAFSUK is an amalgamation of Cyrell and Ines from #MAFSAustralia just awful!”

Alongside a series of wedding photos, the star insisted that viewers didn’t see the “good bits” from the day.

She penned: “TIL DEATH DO US PART. WOW WHAT A WEDDING! I can now tell you after what seems like forever it was me and Ant that finally tied the knot!

“Thank you so much to everyone for your unbelievable support so far! My phone is blowing up with messages, I can’t reply to you all but I definitely see you.”

Nikita went on: “I can’t stress this enough that @e4mafsuk is a reality show and it is edited completely for YOUR ENTERTAINMENT!

“Myself and Ant hand on heart had a great day filming our wedding as did our friends and family that got on like a house on fire.

“They have to dramatise things to make it look extra & juicy so you are at the end of your seat eager to see more! Unfortunately they didn’t show much of our good bits but anyone at the ceremony can vouch it wasn’t as harsh as it looked! I’ve always been an honest person & true to myself.”