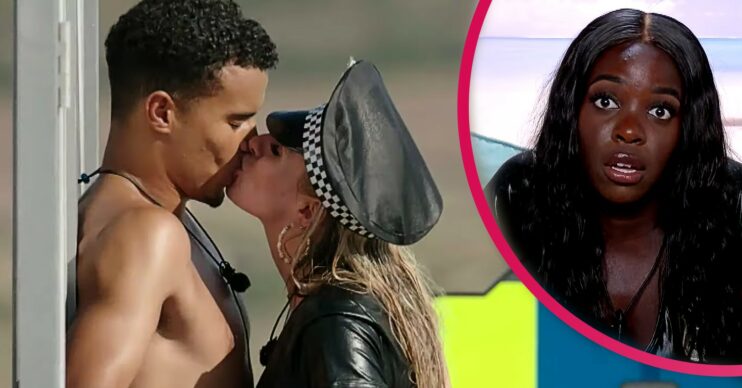 Love Island preview: It all kicks off between girls as Chloe kisses Toby

What does this mean for Kaz and Toby?!

A Love Island preview sees things properly kicking off tonight (Thursday July 8) when Chloe makes a sensational play for Toby during a challenge.

And you just know this isn’t going to go down well with Kaz.

What happens on Love Island between Chloe and Toby tonight?

During the challenge, a first look video shows the girls pick a boy of their choice to throw in the mocked-up ‘Love Island jail’, but not before deciding whether or not to share a smooch.

Kaz is up first and Toby is definitely impressed.

Speaking in the Beach Hut, Toby says: “She really went in for it. She set the tempo for all the girls.”

However, during the challenge – which sees the girls dress as sexy police officers – Chloe chooses Toby and the pair share a kiss.

And not just any kiss.

The video shows Kaz definitely not impressed, asking her pals why Chloe chose to kiss Toby that way.

Later on, some of the girls are drinking around the bar, and that’s when it all kicks off.

A slanging match ensues, with Chloe sighing: “I can’t be arsed with this drama.”

What does Chloe say to Toby?

Earlier in the episode, Chloe and Toby discuss their feelings for each other.

Newbie Lucinda asks her: “So, what’s going on with you? Do you fancy anyone in here?”

“Maybe,” she replies. “My type is Toby. He is my type on paper but I just love Kaz.”

Read more: Love Island news: Aaron and Sharon on the rocks after surgery row as intruder breaks into villa

Later, Chloe asks Toby for a chat. Toby says: “Out of all the girls here, you intrigue me the most.”

Where does this all leave Kaz and Toby? And what about their coupling?