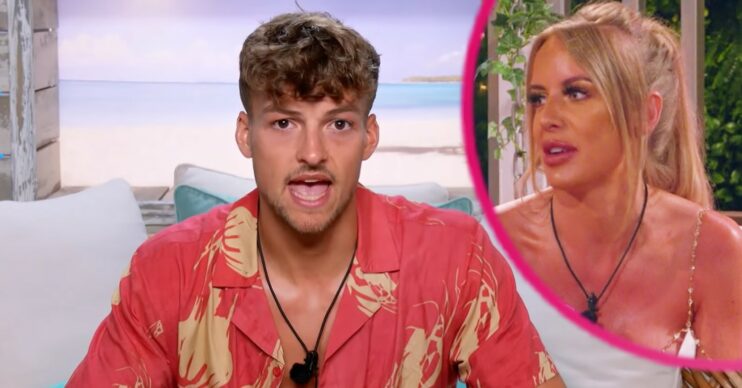 Hugo was previously left in tears after offending Faye this week

The lovable teacher is yet to find love on the ITV2 dating series, despite being coupled up with Sharon and Chloe.

But it appears Hugo caught the attention of newbies Millie and Lucinda on Wednesday (July 7).

During last night’s Love Island, the bombshells both chose to take Hugo on a date.

The teacher cooked a pasta dish for Lucinda, while Millie was treated to dessert.

Speaking after the date, Hugo gushed over his romantic time with boutique owner Lucinda.

Read More: Love Island Hugo’s ‘fake’ comments to Faye and Sharon – who was in the wrong?

He shared: “You don’t find girls who look like that in real life.

“Honestly, she is made from the Gods.”

Meanwhile, in the villa, Faye appeared to dish out some advice for Hugo.

The lettings manager joined Chloe in the bathroom as the pair discussed the male Islanders.

Faye said: “Hugo’s got to make out that he’s not cringey.”

At one point, she even mocked new girl Millie’s laugh.

However, viewers were far from impressed with Faye’s behaviour.

On Twitter, one said: “Faye saying ‘Hugo’s got to make out he’s not cringey’ yet again she’s bullying Hugo. #LoveIsland.”

Faye is not helping herself going in on Hugo for absolutely no reason. Why is he cringe? Because he doesn’t walk around showing his pecs and beating his chest? Pure nastiness. #loveisland

A third tweeted: “Faye is actually a proper nasty piece of work, saying Hugo is going have to make out like he’s not cringey on his date. You’re the most cringe in there love. Get her out.”

In addition, a fourth wrote: “Hugo is ‘cringe’ according to Faye? Sis you just admitted to the world that your parents bought you a boob job at the grown age of 18 because no guys liked you…”

Hugo is ‘cringe’ according to Faye?

Meanwhile, others seemingly agreed with Faye.

Furthermore, a second tweeted: “I’m sorry but Hugo is cringe. He’s only there still out of pity, let’s be real.”

What happened between Hugo and Faye?

Faye’s comment follows shortly after Hugo offended the travel agent during a challenge.

On Tuesday, the PE teacher was left in tears after admitting he doesn’t like ‘fake looks or personality’ on a partner.

Faye and Sharon later slammed Hugo over his ‘ignorant’ remark.

Faye said: “That word [fake] keeps getting thrown around doesn’t it? It’s ignorant as [bleep].

“I don’t give a [bleep] if he’s crying. He needs to get [bleeping] educated why girls get work done.”

However, Hugo insisted: “I didn’t mean anything malicious did I? I just didn’t mean to upset anyone, that’s the last thing I wanted.”