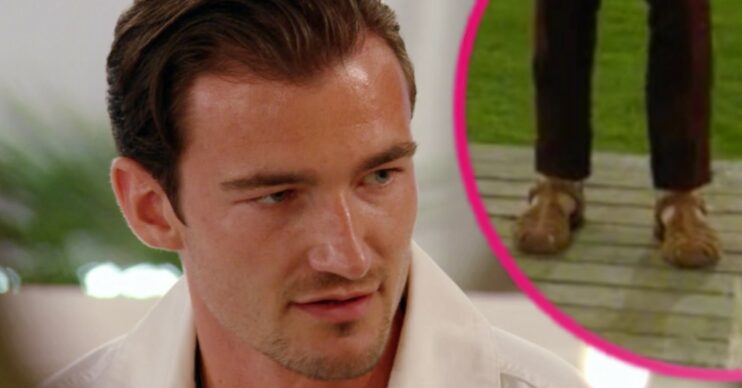 Some viewers even likened him to Jesus

The model waved goodbye to ITV2 dating series alongside Priya Gopaldas, after the couple were voted the least compatible by their fellow Islanders.

But it was Brett’s unusual outfit that really got viewers talking.

Prior to being dumped from the villa, Brett and Priya sat down for an awkward chat.

Priya previously labelled the surprise bombshell ‘boring’, while Brett appeared to enjoy their time together.

They soon decided to continue in the competition as friends.

However, the pair later found themselves in the bottom two after being voted by the public.

The dumped couple then said their goodbyes as fans noticed Brett’s outfit – particularly his choice of footwear.

The 27-year-old PhD student was seen wearing a pair of tan sandals and white socks.

What are the best memes about Brett Staniland’s footwear?

Fans rushed to comment on the unusual pairing, with some even likening him to Jesus.

Here are the best tweets…

Me wanting to know if brett walks on water with those jesus sandals #LoveIsland pic.twitter.com/c45bK6vVRc

What in the Holy St Moses Sandals and Socks is going on, Brett?#LoveIsland pic.twitter.com/6beOAsGBUo

Brett’s biblical sandals are killing me. He looks like he just came back from a PPV viewing of David vs Goliath #LoveIsland

Christ, perhaps they should start checking suitcases before anyone enters the villa going forward to stop any more sandals like Brett's making their way in!!! #LoveIsland

#LoveIsland is anyone going to talk about Brett's outfit 🙁 He had Jesus sandals on and a white denim jacket?

Meanwhile, others claimed that Brett’s outfit reminded them of their dad’s wardrobe.

Well Brett’s dressed like a Dad, who wears those sandals 🤷🏽‍♂️ #LoveIsland

And it appears he’s still keen on getting to know Priya.

He said: “I would love to keep getting to know her and date her properly, but equally I’d need a different dynamic. I’d need more from her, I need effort from her.

“I want her to plan stuff. Even just a simple thing like a run and coffee date. Just so it feels that reassurance that she also wants to be there and do stuff with me.”

However, Priya shared: “I don’t think there is anything romantic there but I know for certain there will be a friendship.”