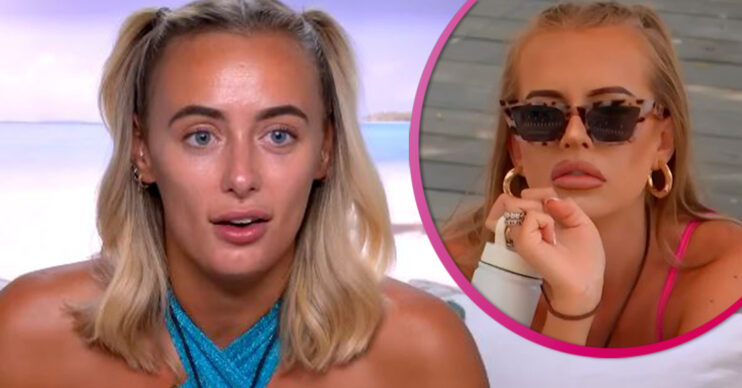 One couple will be dumped from the villa tonight

The Love Island first look for tonight’s show has left viewers predicting a major clash between Faye and Millie.

One couple will be dumped from the villa tonight (August 16) after four pairs were voted the least compatible by their fellow Love Islanders.

But Faye doesn’t seem happy as she tells Teddy she’ll “lose her [bleep]” if she discovers a couple has voted for them without telling her that reason.

What happens in the Love Island first look?

Faye tells Teddy: “If someone has said something and given a reason and not said that to my face, I will lose my [bleep].

“Because one thing I can’t stand in this world is two-faced people.”

The next day, Millie and Liam are discussing their decision to vote Teddy and Faye as one of the least compatible couples.

Millie says: “We had to make a decision and we solely based it on…”

Liam cuts in: “She said they’re not compatible.”

Millie replies: “Yeah, she’s actually said it. No one else has said that.”

Millie says in the Beach Hut: “If Faye finds out that her friends have voted for her, it is going to be World War Two.”

And viewers are thinking the exact same and believe Faye is going to clash with Millie and the others who voted for her and Teddy.

One person said on Twitter: “Not Millie being scared of Faye finding out the results of the votes. If she does it will be WW2.”

Another wrote: “Faye is gonna fly off the handle at Millie because they’re bffs so this should be very uncomfortable.”

In addition, one added: “Feeling sorry for Millie, Kaz & Liberty tonight the poor girls will have to deal with Faye screaming at them for choosing her & Teddy as the least compatible.”

After that, a fourth tweeted: “So basically Faye is going to kick off at Kaz & Tyler, Jake & Liberty, Millie & Liam for voting for her? BORE OFF.”

What else happens tonight?

Meanwhile, during tonight’s first look, Priya admits she’s got the “ick” with Brett.

After their dinner dates the previous night, Priya tells Kaz and Liberty: “My date with Brett didn’t go very well. He’s quite boring. His boring side, I never picked up on.

“When we’ve been chatting before, I can talk to him for hours and hours. I didn’t expect it. I feel like I’ve got the ick.”

Episodes are available the following morning on BritBox.

Do you think Faye will kick off? Leave us a comment on our Facebook page @EntertainmentDailyFix and let us know.