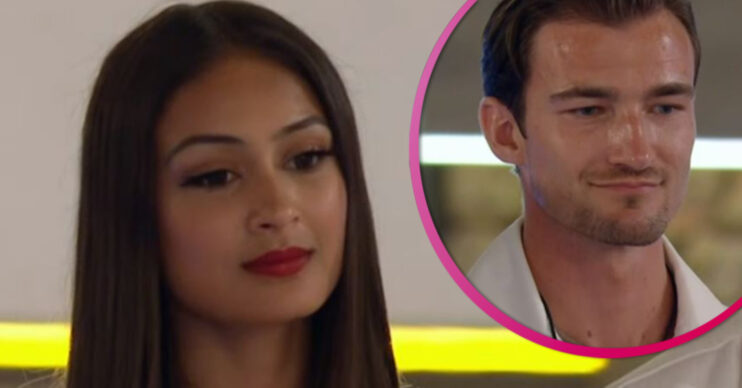 Liberty and Jake, Mary and Aaron, Priya and Brett and Faye and Teddy were all at risk of being dumped after being voted the least compatible couples by their fellow Islanders.

The public then had to vote for their favourite couple.

Priya and Brett left the villa tonight after deciding to just be friends earlier in the show.

Viewers shared their thoughts on Twitter, and not many people were shocked.

One person sarcastically said: “Priya and Brett?? No way?? Shock of the century???”

Another wrote: “Pretends to be shocked with that most predictable episode ever.”

A third added: “Well that was the most pointless episode, so predictable.”

Another tweeted: “Tonight’s episode was so boring and predictable. Everyone knew Brett and Priya were going.”

During their exit interview, Priya and Brett hinted they would still enjoy a date on the outside.

Brett said: “I think we said we would have a date when we get back… so we’ll see.”

Priya added: “Like we’ll start off with a coffee date, see how that goes. But yeah, we’ll definitely be friends.”

Meanwhile, things seem to kick off in the villa tomorrow night as a sneak peek revealed Faye lashing out at Jake.

At the end of the episode, a clip was shown of Faye shouting at Jake: “She is the most genuine person I’ve ever come across in here,” seemingly talking about Liberty.

Faye adds: “And you, outside or in, are a different person and you’re [bleep] me off now.

“I’m so far done with you Jake it’s unreal.”