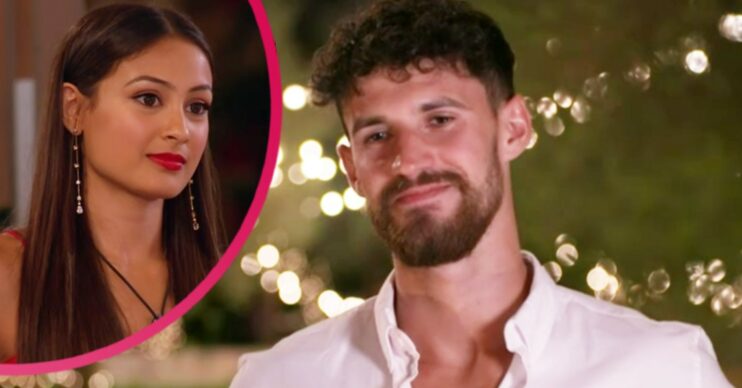 The Irishman was sent packing tonight

Love Island star Matthew MacNabb has been dumped from the villa tonight (August 11).

The Irishman, who first appeared in the main villa during Casa Amor, failed to turn the head of new girl Priya Gopaldas.

Instead, the stunning medic student chose to save Brett Staniland.

Love Island: Matthew is dumped from the villa

The tense recoupling saw the girls choosing which boy they wanted to save.

Second in line was Millie, who chose to save Liam.

Read more: Love Island fans anticipate the ‘meet the parents’ episode, but could it be the most dramatic yet?

Despite their complicated villa journey, Chloe decided to stick with Toby.

Ahead of choosing the footballer, Mary said: “I can’t wait to start this journey with him and see where it goes.”

The medic student was left to pick between Matt and Brett.

It’s bitter sweet because Matt is such a good guy

In her recoupling speech, Priya revealed that Brett made her “comfortable” and she loved to “stare into his eyes all day”.

As a result, Matt’s journey on the show came to an end.

Following her decision, Priya appeared emotional as she said: “It’s bitter sweet because Matt is such a good guy.

“I’ve got so many positive things to say about him and that’s why I’m so upset.”

Meanwhile, Matt shared: “Priya’s decision tonight was a shock to me because I thought we had a connection.”

However, viewers were left divided over the dumping.

On Twitter, one said: “Priya literally lead Matthew on then dumped him as soon as the new lad came.”

Another added: “Matthew was one of the nicest guys there, he should of got to stay instead.”

A third wrote: “Matthew was my favourite!! Don’t wanna watch it now.”

Aww Matthew man priya has made the wrong choice#LoveIsland

As much as I’m gutted to see Matthew go, Brett was definitely the right choice for Priya. Matt and Priya never would’ve worked in the outside world, you could tell there was nothing of any substance there #LoveIsland

A fourth shared: “I’m sorry but I can’t be the only one fuming that Priya chose Brett?! Poor Matthew.”

However, one commented: “As much as I’m gutted to see Matthew go, Brett was definitely the right choice for Priya.

“Matt and Priya never would’ve worked in the outside world, you could tell there was nothing of any substance there.”