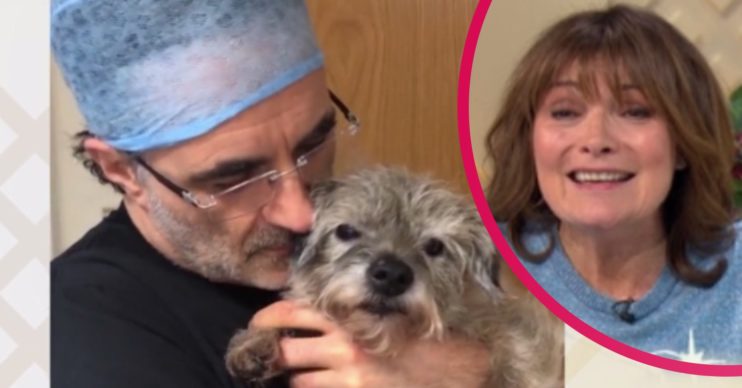 The poor thing was run over!

And some were driven to tears by his absolute devotion to his elderly terrier.

Noel, 52, told Lorraine, 61, how she was run over, and how he spent hours saving her with surgery.

Lorraine asked him: “I know how incredibly injured she was. How is she doing?”

What happened to Noel The Supervet’s dog?

“She’s a lot better now thank you Lorraine, she’s getting a lot stronger every day.

“She’s still quite weak on her back legs. But she’s lucky to be here.

“And she’s a poppet. She’s my little girl. She’s fighting – she’s a fighter like her daddy.

Noel had to operate on Keira after she was run over

Before adding: “Thank you for everyone’s prayers and good wishes.”

Keira was then shown swimming in a pool as part of her recovery program.

Lorraine continued: “You were there when you were struck by the van. That must have been horrific.

“And then you had to operate on her. That must have been really hard actually?”

“To be the parent of the animal in my consulting room…I certainly felt what it was like to have the shoe on the other foot.

“And to be desperately worried about the animal that you love. And that’s an integral member of your family.

Before adding: “For me it was intensely traumatic.”

While he went on to say that he could hear her ‘body explode’ after she was struck by the van.

But the accident happened outside of his Surrey practice, and he was forced to pull her from under the wheel himself.

In fact, one viewer enthused: “Omg the way @ProfNoelFitz was talking about animals on @lorraine this morning had me in floods of tears,what an amazing person. I love my dog so much and I I’d be banging on his door if anything happened to Finn #lorraine.”

While another user tweeted: “What a cutie Noel Fitzpatrick is, so loving towards animals #supervet #Lorraine.”

Whereas a third user gushed: “@reallorraine such a humble guy loved seeing Supervet & Kiera on the show today such dedication & love he’s simply the best!”