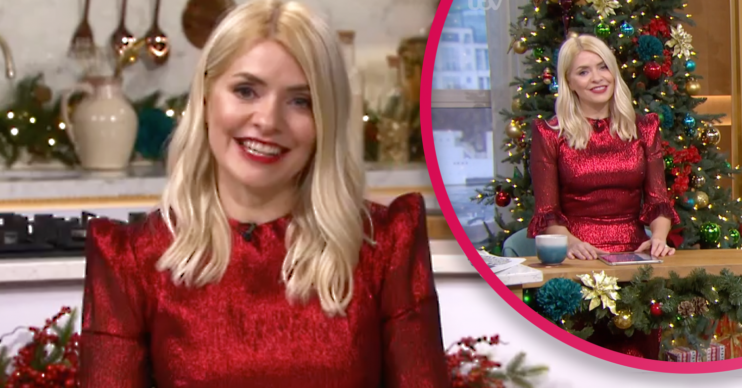 Holly Willoughby wore a gorgeous red dress to host This Morning today (December 7) but fans were pretty divided after she posted her #jollyhollychristmas selfie to Instagram.

Holly revealed she was wearing a rented red dress to front the show today.

It was designed by The Vampire’s Wife and featured frilled sleeves and a frilled hem.

The dress also had a very festive metallic sheen.

What did viewers say about the red dress Holly Willoughby wore on This Morning?

The majority of Holly’s followers absolutely loved her dress.

Kelly Brook also commented on the dress. She said: “Love,” and added the stars in their eyes emoji.

Kate Thornton revealed she had her eye on the dress, while Davina McCall commented: “Wow!”

Another fan commented: “Is there anything you can’t wear? You look good in everything!”

Others commended Holly for bringing the spirit of Christmas and called her “Mrs Claus”.

What did the dress haters say?

However, not everyone was a fan of the dress.

“Looks like an old pair of curtains,” said one.

“I’m glad it’s not just me who thought that. Holly is gorgeous and could get away with wearing a bin liner but her fashion sense is very bizarre,” the said.

Others said the dress Holly wore on This Morning looked like a “sweet wrapper”.

“Normal you get it spot on but sorry, this dress is horrible,” said one of her followers.

“It’s a little too much for daytime TV,” another stated.

Normal you get it spot on but sorry, this dress is horrible.

Another said they wished Holly would support the high street as it needs all the help it can get at the moment.

They said: “Holly’s daily style should eally be promoting the high street as whatever she wears sells out so quickly and they SO need our help right now. It’s so sad seeing so many shops closing.”

“We need you to wear more high street,” said another. “More affordable.”

Money was on the mind of other followers, too.

The dress does indeed retail at £1,595 and you can get it on the Matches Fashion website.

However, as fans have stated, you can indeed hire the dress.

Head to our Facebook page @EntertainmentDailyFix and tell us what you think of Holly’s dress.