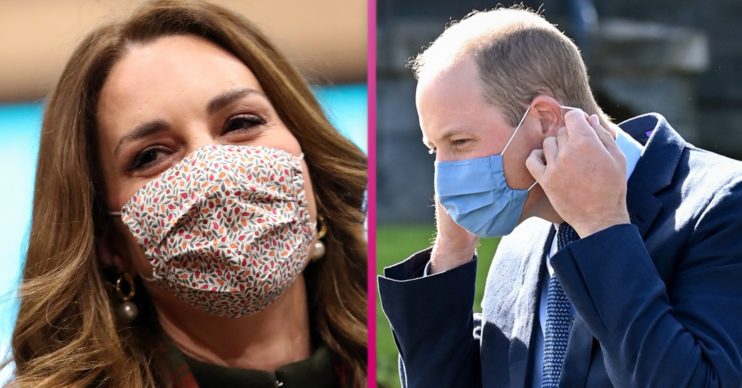 It's day two of their three-day 'Thank You' tour!

Prince William and Kate Middleton have touched down in Edinburgh, Scotland to thank NHS workers.

The Duke and Duchess of Cambridge have embarked on an ambitious three-day train tour to thank essential workers during the pandemic.

They were greeted in Edinburgh by a bagpipe player and then were off to meet with NHS heroes.

Kate looked stunning as she emerged in a mid blue designer coat. Designed by Karen Walker, she is a New Zealand designer who is favoured by both Kate and Meghan Markle.

On Sunday evening they boarded the royal train from Euston Station.

Prior to boarding, they were serenaded by ‘Welsh Elvis’ Shakin’ Stevens.

Why are Prince William and Kate Middleton meeting with NHS workers?

He said it was a huge honour to perform his Christmas hit Merry Christmas Everyone to the royal couple.

The iconic singer said: “I’m loving it, it was lovely to be invited. And it was them who chose the song. Over the moon.”

Before commending the royals efforts with: “It’s lovely to give back isn’t it? It’s nice to give back and they are leading the way.

“It needs something to cheer us up doesn’t it? Because what we’ve got, we don’t know how long it’s going to go on for, so you have got to keep your pecker up.”

Where did Kate and William visit in London?

One overground driver said of how he stopped his train from crushing a young child that had fallen on the tracks.

A stunned Prince William replied:  “You saved his life? How fast were you going at the time?”

Driver Glyn Smith said it was about 20mph before adding: “It could have been so much worse.”

The bagpipes are a giveaway if you’re trying to guess the first stop on William and Kate’s #RoyalTrainTour …
The royal train pulled into Edinburgh Waverley station where they will then meet NHS staff and paramedics who were on the #COVID19 frontline 🏴󠁧󠁢󠁳󠁣󠁴󠁿 pic.twitter.com/i0QQfs38Fa

He also told Alero Abbey, TfL area manager for Green Park and Euston: “It’s moments like this when people really appreciate what you do every day. Suddenly we all know what you do and that you do a really good job.”

Kensington Palace confirmed the tour as: “The Duke and Duchess are very much looking forward to shining a spotlight on the incredible work that has been done across the country throughout this difficult year.

“And to sharing their gratitude on behalf of the nation for all those supporting their local communities ahead of the Christmas holidays.”

Their whirlwind trip will see them stop off at England, Scotland and Wales.