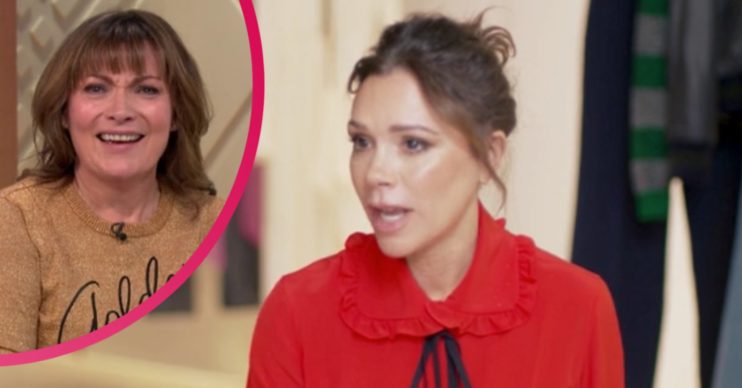 The fashion designer appeared on the ITV show earlier today

The fashion designer, 46, spoke to Mark Heyes from her office in London, as she opened up on her son Brooklyn’s upcoming wedding and Christmas with the Beckhams.

However, some fans were left seriously puzzled by Posh’s body language.

What did Victoria Beckham say on Lorraine?

During the exclusive chat, Victoria dished the dirt on Brooklyn’s engagement to fiancée Nicola Peltz.

The mum-of-four explained she was happy her eldest son, 21, had found love amid the coronavirus pandemic.

Victoria said: “They’re so happy. She’s wonderful, sweet and kind. She’s such a lovely, warm woman. We couldn’t have asked for Brooklyn to meet a more adorable lady.

Read more: Victoria Beckham shocks fans with posh tracksuit as they compare it to ‘Primark’

The former Spice Girl added: “I don’t know who is more excited, the kids or David! We’ve had Christmas music playing in the Beckham house for about a month and a half!”

Despite opening up about her personal life, the entrepreneur didn’t convince everyone.

A second added: “I do like Victoria Beckham but she sounds like she’s acting when she talks.”

A third commented: “You say she hasn’t changed but her accent has. Quite a lot!”

Others, however, appeared to love Vic, with one saying: “Watching @lorraine with @VictoriaBeckham’s interview with Mark, she really is an iconic lady of beauty and grace… and @MarkHeyes is hot aswell!!”

Another agreed: “How lovely is Vicky Becks.”

What else has Victoria been up to?

When she’s not working away in her London office, Victoria is often found in her Cotswolds mansion.

However, the star and her husband are believed to be “at war” with their neighbours over extension plans at the country pad.

The famous couple have plans to build a huge kidney bean shaped lake, but their neighbours are apparently not too happy about it.

They reportedly wrote to West Oxfordshire District Council: “I must object in the strongest terms to this new proposal. I was an objector to the original plan and my concerns were ignored.

“I feel that his plan to enlarge the lake could increase the chances of flooding in the area considerably. Also, the lake looks just too large for the area it sits in.”

Before adding: “It is out of keeping with the area and what is planned next? Motor boats zooming up and down and shattering the peace? it is just not on and should not be allowed.”