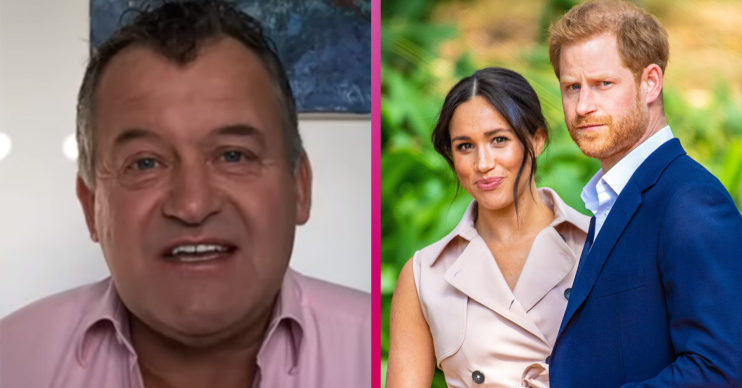 Harry and Meghan have been living in Los Angeles

Paul Burrell, who was Princess Diana’s butler, appeared on Lorraine and predicted Prince Harry won’t be happy living in America.

Harry and wife Meghan Markle moved to the US after stepping back from royal life.

However, Paul said he thinks the Duke of Sussex is “besotted” with Meghan and he’s “being led along her path”.

What did Paul Burrell say on Lorraine?

Paul said on the show: “He’s married this woman who has ideas of her own.

“He’s so besotted by her and totally in love with her that she can’t do any wrong.

“So now he’s being led along her path. It won’t always be that way because I personally cannot see Harry happy in Los Angeles.

“All his friends, family and his culture are back here in England.”

Prince William to step in?

He continued: “He’s going to want to come back to his family.

“His brother is the one who’s going to embrace him and bring him back into the fold.”

He’s so besotted by her and totally in love with her that she can’t do any wrong.

Paul also said he believes Princess Diana’s 60th birthday next year will bring Harry and Prince William back together amid their alleged feud.

He said: “There’s a void that’s open between William and Harry and that void should be filled by their mother.

“She’d be the one to bring them back together again.

“She treated them exactly the same, she knew one would be King one day and the other wouldn’t.

“She would want them to stand side by side. Ironically, it’s going to be her that brings them back together because July 1st next year would have been Diana’s 60th birthday.

“The boys will stand side by side and unveil a statue to her memory in Kensington Palace Gardens.”

He added: “I’m hoping from then on, we will see an end to this spat that they’ve had.”

Meghan and Harry to do big interview?

Paul also said he believes Meghan and Harry will do an explosive interview like Diana did on Panorama following her split from Prince Charles.

Read more: Prince George had to turn off David Attenborough documentary because it was too upsetting

He said: “It’s only a matter of time before they give a major interview to someone huge in the United States.

“And do a similar Panorama interview for the world.”