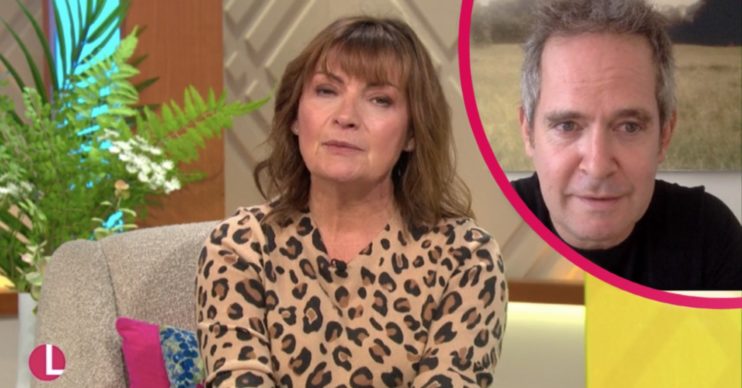 Lorraine Kelly has hit back at claims she battled through a “car-crash” interview with actor Tom Hollander due to technical difficulties.

The Scottish presenter, 60, was faced with a series of awkward blunders during today’s chat with the Night Manager star.

But after tabloids picked up on the issues, Lorraine was quick to fire back.

Taking to Twitter, the ITV host shared an article referring to Tom as “grumpy”.

Alongside the story, she wrote: “I actually thought he was adorable – zoom calls can sometimes be tricky.”

During the interview, Lorraine was left in the lurch when Tom failed to speak after she introduced his BBC drama Us.

The 53-year-old actor was joined by co-star Tom Taylor, which also caused confusion for poor Lorraine.

Opening up the chat, she said: “I loved this, I binged on this Tom, it appeals to absolutely everybody.”

The TV stars remained silent, before Hollander answered: “Which Tom are you speaking to?”

She added: “I’m sorry Tommy! It’s all these communication problems isn’t it?

What did Lorraine viewers think?

Viewers took to Twitter to comment on the interview, with one writing: “My God, this interview with Tom Hollander is stressing me out.“

A third added: “Tom Hollander is a bit grumpy this morning #Lorraine.”

While another viewer rushed to Tom’s defence, saying: “I didn’t think he was ‘grumpy’.”

The chat comes days after the lovable TV star revealed she was once rejected and mocked for her accent by a former BBC boss.

Lorraine claimed her boss called her accent “offensive” after putting herself forward for a reporter role back in the 1980s.

Speaking on the Blank podcast, Lorraine said: “I went from East Kilbride News to BBC Scotland for a while – only for a year – and then I joined TV-am as their Scottish correspondent.

“When I went to work for BBC Scotland as a researcher, I got called into the boss’s office and I thought he was going to give me a job as a reporter, because that’s what I really wanted to do.

She went on: “So when I got told that, I just applied for a job at TV-am, and luckily the boss was an Australian and didn’t really care how people spoke.”