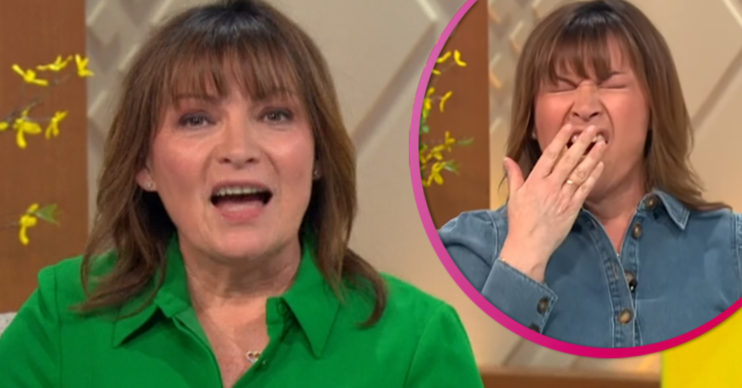 Her antics baffled many viewers yesterday

Lorraine Kelly has ensured her viewers not to worry after a bizarre interview with KSI on her show yesterday.

The presenter was interviewing rapper KSI when her “giddy” behaviour left viewers baffled on Twitter.

During the interview, Lorraine’s fans picked up on a string of strange antics from the star including complaining about a fly to suffering from cramp.

It left many speculating whether it was part of a Saturday Night Takeaway prank and Ant and Dec were actually behind it all.

What did Lorraine Kelly say today?

On Tuesday’s show, the star addressed the interview and hinted there was something else going on.

She said: “There was a great deal of concern for my wellbeing yesterday after that rather giddy interview with KSI.

“Don’t worry, all’s going to be revealed later on in the week. That’s all I’m going to say.”

Lorraine added: “Poor KSI. I did actually say to him afterwards, ‘Sorry about that.’ But you’ll find out.”

During yesterday’s chaotic interview, Lorraine suffered a cramp midway through and even got up to walk it off.

She told the rapper: “Oh darling I’m sorry… I’ve got cramp in my leg.

“Ah sorry it’s really annoying. It’s poppycock that is what it is. I wish you were here to help me.”

Another moment saw Lorraine yawning as KSI was talking.

What happened during Lorraine’s interview with KSI?

In addition, Lorraine claimed there was a mouse in the studio.

Read more: Harry and Meghan: Lorraine Kelly tells couple to ‘get a grip’ after latest controversy

Meanwhile, at the start of the interview, Lorraine was seen waving her hands around as a fly was in the studio.

Viewers were baffled by the presenter’s behaviour and shared their thoughts on Twitter.

Another speculated: “Can’t work out if Lorraine has had a heavy weekend or if it’s an Ant and Dec prank and they are in her ear.”